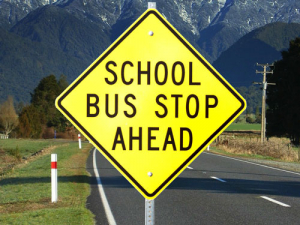 A petition to get seat belts installed on school buses has been presented to Parliament.

Petition organiser, Waitaki Valley farmer Philippa Cameron, says in her district she talked to a bus driver who won't put five, six and seven year-olds in the front seats.

"That poor bus driver feels responsible for their safety so she puts them further back so they won't fly through the front."

That could start with the Ministry of Education requiring, from a given date, that any company tendering for a school route must use buses fitted with seat belts, she says.

The petition was received by National MP Jacqui Dean who pledged to put it before MPs.