PKE rules not made to be broken 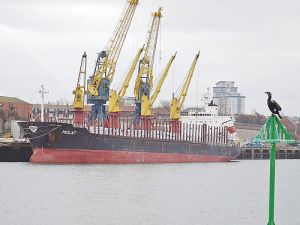 A file picture of MV Molat, caught up in the PKE shipment saga at Tauranga Port.

PKE rules are there for a reason and importers must abide by them, says Federated Farmers Dairy chairman Andrew Hoggard.

He says a robust process is in place for importing palm kernel expeller (PKE) and all importers seem to follow them.

He was commenting on 23,000 tonnes of PKE sitting on a ship at Tauranga Harbour since early last month; the Ministry of Primary Industries has blocked the vessel MV Molat from unloading the cargo because it came from an unapproved facility.

MPI says the importer is prepared to have the PKE heat treated but there are calls to send the ship back.

Hoggard likened the shipment to cases on the TV show Border Patrol, where people bring in meat without declaring it.

“It’s pretty stupid for people to do that; we have strict rules in place for a reason.”

The shipment, believed to be owned by ADM, came to MPI’s attention on September 2 when it applied for biosecurity clearance.

“On examination of the paperwork, MPI found that a Malaysian facility where some of the PKE was produced was not approved under MPI’s current import health standard,” a MPI spokesman told Dairy News.

At the time of writing MPI was assessing a proposal from the importer to have the product heat treated. “The final decision has yet to be made.”

He says New Zealand has a stringent border security system; it has strengthened under his watch.

He says PKE must come from a certified plant.

“It is an important feed source for the dairy industry.”

Labour has pounced on the shipment and is calling for it to be sent back.

Labour’s biosecurity spokesman Damien O’Connor says the PKE is from an unregistered supplier in Malaysia.

“In previous cases, huge biosecurity risk from possible foot and mouth contamination have been identified from PKE imports not up to standard. The risks are high and we should take no chances.

“If National and MPI are considering letting this shipment into our market, it shows they still do not understand the enormous risk biosecurity hazards pose to our economy and communities,” says O’Connor

Greenpeace has questioned why the MPI decision is taking so long.