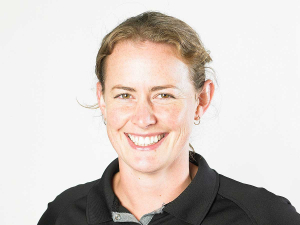 Jacqueline McGowan, who’s an expert in heat stress, says the ways of mitigating the effects of heat are similar for both cows and people – the difference being that cows prefer temperatures below 20 degrees Celsius whereas humans can cope with it being a little warmer – up to 24 degrees.

She says the first sign that a cow is suffering from heat stress is when it starts to breathe more. She says if the cow breathes less than seven times in ten seconds, it is okay, but over ten times, it’s in trouble.

“Unlike humans they can’t sweat all that much and so for evaporative cooling they breath more. They will stand up more, sometimes gather in groups with their heads down, drink more and they will eat less. That reduces the metabolic heat that they are producing, but the consequence of that is that they reduce their milk production,” she says.

McGowan says over the last few decades science has enabled researchers to realise that cows actually feel warm at cooler temperatures than was previously thought. She says a NZ scientist did some research in 2008, which established the temperature humidity index (THI) that shows cows like to access shade that comes at around 64 THI – the equivalent of around to 20 to 21 degrees depending on the humidity.

“A lot of this is related to the biology of the cow. They are really big animals which means they are producing a lot of heat and have less skin relative to their size to get rid of the heat.

“They are also ruminants, so that process of digesting grass produces a lot of heat and then on top of that, like humans, when they are lactating, which means they are running much hotter, they have more metabolic heat to get rid of,” she says.

For cows, seeking shade is their preferred way of keeping cool, but McGowan says on many dairy farms, shade is not as available as it used to be. She notes the advent of pivot irrigators, farmers fencing off bush areas and wetlands have reduced the number of trees in paddocks where cows can seek relief from the hot sun.

“Those farmers that don’t have trees in paddocks will often move their cows to a covered feed pad or maybe a small area of bush.

“They can also take them to the dairy shed and turn on the sprinklers and that will cool them down fast and last for several hours. But the fact is cows prefer shade,” she says.

Jacqueline McGowan, DairyNZ, says obviously more is known about the needs of people in hot weather.

She says a key message to managers is to be respectful in the way that people work and try to accommodate their needs.

"There needs to be clean drinking water in the shed. Some employers are very good to their staff and have snacks and drinks there in a fridge for them. Sunscreen should be available and everyone should wear a hat," she says.

Working in the sun can make people tired and irritable says McGowan and having good communication with staff to work out what best suits them and how this can be fitted into the daily routine of the business.

She says planning the day to avoid doing some tasks in the heat of the day is an obvious option.

"Accommodating individuals needs can also make for a positive and good work environment. For example, people with young families like to be home in the early evening while some are happy to take time off during the day and work in the evening," she says.

McGowan says the objective should be to devise a system people enjoy and not just work longer in the summer because there are more daylight hours. She says if farmers want more information on this subject they should go to the DairyNZ web site.

GoDairy campaign back on the go

The dairy industry is making another push to attract workers to staff-strapped farms.

New Zealand dairy farmers continue to play a key role in a post-Covid economy as a sustainable producer of milk for the world.

Farmers want stakeholders to work together

DairyNZ says it will work more closely with other industry stakeholders on major issues facing farmers.