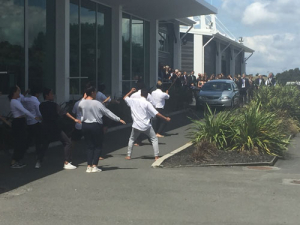 Over 1000 people attended the funeral service at Mystery Creek. Wilson passed away on Monday.

He stepped down as Fonterra chairman in July last year on medical grounds.

Wilson’s predecessor at Fonterra, Sir Henry van der Heyden delivered one of the eulogies at the service.

He started with a personal message from former Fonterra chief executive Theo Spierings, who joined the co-op nine months before Wilson was named chair-designate. Spierings left the co-op in September last year.

Van der Heyden told the funeral service that he spoke to Spierings, who was “deeply saddened by John’s passing”.

“He spoke to me and remembers fondly the day he arrived in NZ, he was met by John and who typically took him straight home to the farm and family.

“From that first day, he says he always felt at home and welcomed on the farm.”

Van der Heyden, who was asked by Wilson’s widow, Belinda to deliver the eulogy, recalled his first experience with Wilson’s leadership quality.

It was during a NZ Dairy Group conference in mid 1990s.

“I had just been elected to the NZDG board and attending a conference; this young red head stood up with a voice twice the size that he was; full of confidence but also full of common sense.

“His delivery was plain, simple and articulate; what impressed me most was his love for the co-op.

“I can still see him now making a huge impression on everyone in that room.

“I came away from that conference knowing that I had met a future leader.”

A private cremation was held after the service.