Global baler maker on a roll 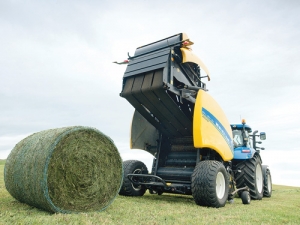 New Holland clearly knows how to produce variable chamber balers: it has at least 235,000 machines worldwide.

Its new Roll-Belt series replaces the BR 7000 series, from which experience it claims capacity increases up to 20% and bales with density higher by around 5%.

The Roll-Belt 150 and 180 models have 1.5 and 1.8m maximum bale diameters respectively, and can be supplied with the standard SuperFeed or CropCutter rotors.

Up front the 2.3m pick-up area is completely re-designed, using five solid tine bars carrying reinforced rubber tines said to be 10% stiffer laterally; they last up to five times longer and help increase working capacity by up to 20%.

At the rear of the pickup a new feed assist roller clears the area and merges the crop centrally to match the width of the bale chamber. Users can specify the non-chopping SuperFeed rotor with a 455mm diameter and 'W' shaped feeder fingers or the 15 knife CropCutter variant for fine chopped bales.

New to the Roll-Belt series is a drop down floor under the rotor area which allows the clearance of any blockages from the tractor seat so baling can continue unhindered.

The variable bale chamber is made up of four belts 273mm wide, which create a large contact area for optimal bale formation. The absence of belt joiners precludes stretching and ensures good bale shape, and the belt surface is self-cleaning in difficult conditions.

Bale density has been increased by adding a second hydraulic density control cylinder, which results in up to 5% greater density than the previous series machines.

All models are supplied net-only as standard, though they can also add twine to increase versatility. The twine feed system has been improved to include a twin feed layout said to help maintain bale shape, and CropCutter models now have a repositioned net feed for faster cycle times; the machines can carry two spares rolls of net.

Control of the machine is ISOBUS compatible which should allow fingertip control of set-up, operation and bale count management.

Completing the new look are single-piece side panels which are locked for safety, but open wide for easy access and maintenance. A power cut-off switch fitted to the drawbar allows shut-down of the baler's electrical system to ensure safe net change or maintenance.

Case has big bales all squared-up

Farmers and contractors seeking to pack more material into every bale are offered a new way to to reduce handling requirements and transport costs.