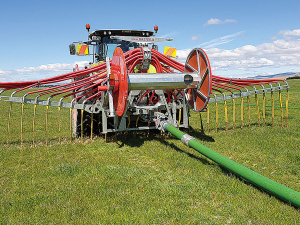 They have employed an umbilical spreading operation on their farm to help.

Having installed a wintering barn about six years ago and seeing an increase in effluent, they employed contractors to do umbilical spreading for the first two seasons, experiencing mixed results.

At the time, they also ran an effluent tanker, but didn’t like the fact it would have taken around 500 trips to and from the paddocks to empty the effluent pond. “This would heavily damage the lanes and I didn’t want to see this happening,” said Louis.

“We found it a lot easier to go into a paddock once, do the spreading and go back out, instead of going in and out multiple times with the tanker. The splash plate system on the tanker also resulted in heavy contamination of the sward, so there was a major delay before we could resume grazing.”

They approached Webbline to look at potential solutions. Louis says, “we did the numbers and worked out it was going to be more efficient and effective to use our own gear, and ended up purchasing an umbilical system with a 9m dribble bar and 1,600m of hose”.

The system includes a Bauer pump powered by a 160hp tractor system that generally pumps around 200,000 litres per hour to the dribble bar that is handled by a 150hp tractor. At the heart of the spreading system, designed and manufactured by Mastek in Ireland, is the Supercut Macerator, a hydraulically driven cutting rotor that chops any fibrous material in the effluent.

At its heart, six knives chop the material before it passes via 45mm diameter outlets to the dribble bar.  Manufactured from heavy-duty galvanised steel, with a transport width of only 2.6m, the dribble bar assembly features outlets across the full spreading width, depositing effluent from a flexible pipe close to ground level. This eliminates odour, loss of nitrogen to the atmosphere and keeps sward contamination to a minimum.

They note that it is easy to see the grass growth where they have been in with the dribble bar, compared to other areas of grass.

“It is a lot more straightforward to operate than it looks at the start; you just need a plan on how to get around obstacles and oddly-shaped paddocks,” says Louis. “With the flow meter in the cab, you can pace yourself for optimum application with the schedule supplied by Webbline, which shows speed needed for the correct rate of application.”