Bouncing back after two seasons of major flooding 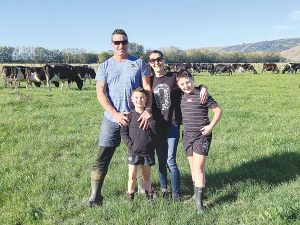 Taieri farmers James and Celia Aitken, with children Harvey (9), and Carlos (6), are heading for one of their best seasons on their farm.

After two seasons of extreme flooding, Taieri dairy farmer James Aitken says he is finally on track to have his best season ever.

He and wife Celia have been on their 90ha dairy farm for the past 10 years and have battled the region's often-wet conditions and heavy soils.

"Twice in the last few seasons we have been under water or have had serious floods come through. It's an ongoing battle to keep the drains clear and pumped out but it's just part of where we farm."

Just 30 minutes from Dunedin, the couple farm 240 cows, just over half their herd are Holstein Friesians, and about 100 of them are registered.

James says after doing around 430kgMS per cow this season. He puts it down to kinder weather this season.

"I'd love to be able to say it's the cows, but after the last two seasons it really is the weather. This year we got a good soaking in early January, but it has stayed pretty dry since then. We're in a bit of a green drought at the moment."

The couple moved onto the farm 10 years ago. James had been working in hospitality on the Gold Coast and knew he wanted to return home and give dairy farming a go. Celia moved back to New Zealand and initially worked for a software company in Dunedin before they started having children.

The couple have two boys, Harvey (9) and Carlos (6) and Celia has since launched an online fashion store for women, Harlos.co.nz.

James says when he came back to New Zealand, he initially picked up work at Busybrook Holsteins with Nathan Bayne. It was there he was reintroduced to dairy farming, breeding and a passion for herd improvement.

"It's nice to be getting up at 5am now to go milking instead of going to bed at 6am when I was working nightclubs on the Gold Coast," James says.

Their herd was put together with carry-over cows and R2 heifers purchased from throughout New Zealand back in 2011. James says he has focused on continuing to breed from some of his better Holstein Friesian lines.

The herd is milked twice a day before moving to milking three times in two days around March. By May, they are once-a-day and then dry off in mid-to-late May.

The main herd is wintered at a family runoff in Middlemarch and James' R2s are brought home to winter on the milking platform.

James says his breeding decisions have been directed towards breeding from Holstein Friesian bulls, but has started finding it harder to find New Zealand bulls he wants to use.

"You go through the catalogues and it's hard to find anything now that doesn't go back to Fairmont Mint-Edition, Telesis Euon Firenze of San Ray FM Beamer-ET S2F. I've started using a small amount of overseas bulls to bring in some new genetics."

The herd starts calving in the last week of July and will be done by the first week of October. James says this year they completed five weeks of AI and then put their own Friesian bulls out for another five weeks, reducing his calving spread to 10 weeks.

He rears all his replacement heifers, and any bull calves are reared through to 100kg for the beef market.

James says they classify their three-year-olds every year; his father Denis Aitken is a TOP Inspector with a passion for breeding Holstein Friesians.

The herd has about six excellent cows, most of them older cows, by Mint-Edition or Firenze.

James says he classified his heifers because it helps him identify where the faults in his herd are and he can make breeding decisions based on that.

"I know I have a problem with rump angle and wide front teats so that's something we're focusing on, along with fertility and production," he says.

"I guess you do it to try and get the perfect cow - that's what everyone wants, isn't it?"