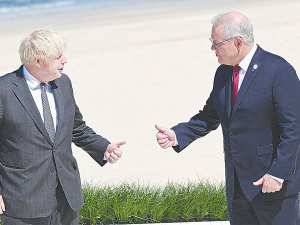 UK Prime Minister Boris Johnson and his Australian counterpart Scott Morrison have agreed in principle to a free trade deal.

According to multiple news sources, it includes a substantial revamp of visa requirements to make it easier for professionals and young travellers to work and live in both countries, recognises a raft of qualifications, welcomes investment, especially in green technology and phase out tariffs and quotas.

This is a good result for trade liberalisation, but frankly it should have been us.

Both New Zealand and Australia started their negotiations last June, but Australia seemed to want it more. There has been an urgency from Australia that has been lacking with NZ.

Dan Tehan, Australia's Trade Minister, flew to the UK in April to negotiate with his counterpart face to face to ensure Scott Morrison could conclude this deal off the back of his G7 invitation.

Damien O'Connor arrived in London last week to begin his equivalent face to face meetings. He deserves to feel uncomfortable sitting watching the formal announcement of the Australian deal - it's not good enough.

Now the really tough test goes on O'Connor and (Prime Minister Jacinda) Ardern to match if not better the Australian deal.

Our NZ exporters want no constraints in exporting their goods and services to the UK, accepting that there will probably be a transition period of some sort. Our employers want access to significant numbers of UK skilled people to help the recovery of their businesses from Covid-19. Our businesses want UK investment and global perspectives to help fund their growth. Our young people want to travel to the UK and ensure those OE years are a part of their lived experience.

Bi-lateral trade deals are a moment in time for governments to showcase how much they value strengthening integration between two peoples and nations. They are litmus tests on how they see the future.

In Boris Johnson and Scott Morrison, with their respective 'I love Australia' and 'Global Britain' mantras express a contagious enthusiasm for what is possible. For them, connecting their countries with each other and the world is critical and Australia and UK appear set on coming out of Covid with a 'go get 'em' attitude creating a pervasive domestic momentum.

New Zealand, by contrast, seems locked in perpetual hand wringing and self-flagellation. We are locked up, seemingly without a plan to unlock; closed to migration of any substance, afraid of foreign investment.

At the very time our Trade Minister should be promoting our agricultural sectors sustainability credentials with gusto, this government holds it up to the light, not to celebrate but to find flaws to critique, regulate and tax.

The Government even frames climate change not as an exciting opportunity to embrace innovation and amplify our strengths, but to close down whole sectors, destock and plant trees.

Worse still is the 'life and death' catastrophizing language used to frame it from the very top.

Bringing this 'hunker down' and defensive attitude to a negotiating table is bad for NZ exporters and I fear it will pervade the UK/NZ FTA deal.

The urgency, the enthusiasm, the passion for NZ exporters needs to be front of centre - starting now!

Todd Muller is National's spokesman on trade and export growth.