What COP26 means for co-op 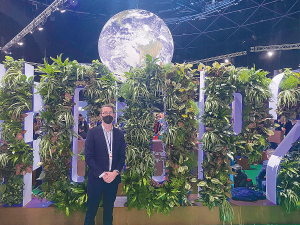 Fonterra's Amsterdam-based trade strategy and stakeholder affairs manager, Mark Casey, recently attended COP26 - the annual United Nations Convention on Climate in Glasgow. Here are his thoughts on this globally significant event and what it means for the Co-op.

Last month I had the opportunity to head the (almost) annual Conference of Parties, more commonly referred to as COP.

This was the 26th COP since the United Nations Convention on Climate Change began and was touted as the most importance since COP21 in 2015 when the Paris Agreement was signed.

The best way to describe COP is two distinct parts. The first is where all the officials get together and negotiations take place, culminating in a final agreement being reached. Then there's an area that's like a mini expo, with countries and industries having booths to hold panel events, discussions and showcase their country and its efforts towards climate change.

Over the week I was there I attended (and presented at) a number of sessions on agriculture and climate change along with Zoom sessions with the New Zealand Government's negotiating team, plus a breakfast meeting with Minister for Climate Change, James Shaw.

Fonterra is part of the Global Dairy Platform (GDP), which is a group of dairy companies from around the world who work together to show the sector's commitment for responsible and sustainable food production.

Here's a brief rundown of the top four things that happened at COP that relate to the co-op.

At the beginning of COP26: three objectives were set out:

On the 1.5 degree target, this was not achieved, but has a "weak pulse", as COP26's UK President Alok Sharma puts it. Prior to COP26, the planet was on track for 2.7 degrees, and with the agreements reached at COP26 it's now predicted we're on a path between 1.8 and 2.4 degrees, so a lot of countries may need to sharpen their pencils a bit. Countries have, however, agreed to revisit their commitments by the end of next year to ensure they're on track to reach less than 1.5 degrees warming.

For funding, there was recognition that many countries had fallen short of the $100b target, and financing efforts have been ramped up; New Zealand has announced a quadrupling of its contributions in this area.

And importantly, the so called 'Rule Book' left outstanding from Paris 2015 was settled - an important step that should now mean that countries are properly held to account for their emissions, requiring transparent reporting and avoiding dubious 'off-setting' of carbon credits.

In order to deliver on these promises, an agreement was reached to accelerate efforts towards the phasedown of unabated coal power and inefficient fossil fuel subsidies - and although the wording is not as strong as many at COP26 would have preferred, it is still a milestone to have coal and fossil fuels expressly called out in this agreemnet for the first time. This is unlikely to impact us as a co-op as it's more about using coal to generate power and we've already committed to getting out of coal by 2037.

So, these were the ‘big ticket’ items of the agreement; there were many other important side agreements and outcomes reached between the COP26 parties, which I simply don’t have room to cover here, but some of the more New Zealand and agriculture specific issues follow below.

Technically this was announced prior to COP26, but it was part of the New Zealand Government’s ‘homework’ it needed to get done in preparation – ramping this up from the previous 30% to 50% by 2030.</p.

This is a big one for New Zealand and took many by surprise, including the New Zealand Government, when it was announced earlier than anticipated. New Zealand is one of 105 countries who have joined a global alliance which together has pledged to reduce methane by 30% by 2030. There was some criticism around this as New Zealand has a target of 10% methane reduction.

Fonterra is part of the Global Dairy Platform (GDP), which is a group of dairy companies from around the world who work together to show the sector’s commitment for responsible and sustainable food production. They recently launched an initiative to accelerate climate change action in the dairy sector, which we have signed up for.

Agriculture is not expressly mentioned in the main COP26 agreement, despite there being a number of panels and discussions related to our sector.

It was encouraging to see a separate multi-government workstream (the Koronivia Joint Work plan) recognised that agriculture is part of the solution to climate change and plays a crucial role in global food systems and bio-diversity. It will be interesting to see what COP27 (hosted in Egypt next year) presents for agriculture.

It was an eventful few days and an incredible event to be part of. While by no means an expert on climate change, I have certainly learnt a lot from what I have seen and heard at COP26, and gained some real insights into the overall environmental importance of global food systems like ours, and the part we can all play in providing nutritional goodness, in a sustainable way, for generations.