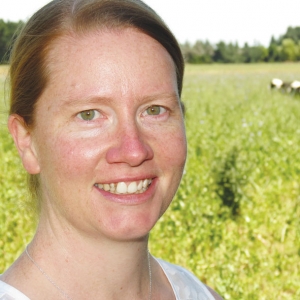 For several years scientists at Massey University have promoted the idea of using herb pasture mixes such as chicory, plantain and red and white clover.

Their research has been picked up by many commercial farmers who are already reaping the benefit of the herb mixes. But the latest study, by Dr Rene Corner-Thomas, has gone a stage further and looked at weaning twin lambs born on ryegrass/white clover pastures at eight weeks and then putting them on herb mix pastures. The result is that lambs weaned a month earlier have the same weaning weights as lambs grazing ryegrass/white clover pastures and weaned at the normal time.

The purpose of the trial, says Corner-Thomas, is to see whether by weaning a month earlier than normal there are benefits to both the ewe and her lambs. Free of feeding her lambs the ewe puts on condition quickly and is better set up for the next breeding season.

“What we are [asking] is, can we eliminate the liveweight gain reduction that you traditionally get when you wean early, by giving lambs higher quality feed?

“What we are doing is weaning them a month early and having them at the same point as you would if you weaned them at the normal time. So you are not really accelerating their growth, but you are keeping them up to speed and in many cases heavier than their counterparts that are not weaned early and had been left on ryegrass white clover pastures with their mothers.”

Professor Paul Kenyon, the head of the Institute of Veterinary Animal and Biomedical Science, who’s overseeing the trial, points out that a ewe’s peak milk production occurs just three weeks after lambing. After that the ewe’s milk production is declining.

“By weeks six to eight the lamb is a ruminant and in many respects the ewe and the lamb are competing for the same feed. There has been plenty of previous work in New Zealand and overseas about weaning lambs early onto concentrates which is never going to work here because of the cost. There has been work done with lambing ewe hoggets on herbages and this has shown that their lambs are heavier than those reared on ryegrass and clover.”

As more farmers use alternative herbages, including lucerne, they need to look at how much area they are prepared to allocate to these new species.

Kenyon adds that herb mixes have limitations over winter. He says depending on the type of farming operation it would be reasonable to plant 10-15% of the farm in herb mixes. Finishers may plant more as they will have less stock on their farms in winter.

But Kenyon says there is no point in just planting a small area where it wouldn’t be possible to rotationally graze stock.  He says farmers have to have enough land to get their rotation going, but then not have too great an area so that it won’t affect their winter grazing.

“Farms will always be limited in how much space they can have for these alternative herbages because they have limitations in winter. We thought that maybe by weaning early you could put a lot of lambs on the herb mix and remove them from the ryegrass white clover pastures which start to lose quality in late spring and early summer,” he told Rural News.

“These herbs however are of high quality in that period. We know that the ewe and lamb are competing for feed from about eight weeks which is ok when you have a lot of good quality feed. But
on most farms in that period the volume and quality of feed is starting to decline.”

These trials have taken place on Massey research farms in Manawatu and Kenyon admits the results may not be applicable to all regions. He says they have done some work with lucerne at their research farm in Wairarapa and the results are good. They have also looked at work by commercial farmers with herb mixes, some very successful.

Massey is hoping to do more trial work in a few months, using herb mixes on one of its own hill country farms and on a property near Port Waikato.

Good management of the herb mixes is crucial, Kenyon says.

“Herb mixes are a bit like lucerne: if you manage them properly they can be a medium-long term option for three-five years. But they won’t last if you over-graze them in winter and if you graze too low repeatedly, for example below 7cm.

Kenyon says the trials were done following suggestions from farmers, who also had a hand in designing the project.

He reckons the results are promising and show real gains can be made by early weaning in conjunction with herb pastures.