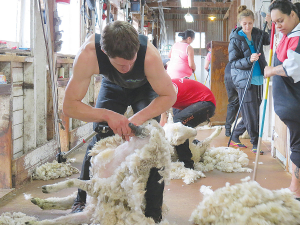 Pre-lamb shearing is hard on ewes.

He says 30 years ago, ewes averaged 55kg and scanned an average of 110%. Today, ewes are 70-75kg and are scanning 190% and over and are similar to high performance dairy cows.

Most of these ewes will be carrying twins and triplets and it is important farmers understand the feed requirements of these animals going into lambing.

In their last 30-40 days of pregnancy, their energy requirements will increase in line with demands from the fetuses and in these later stages of pregnancy ewes are less resilient to feed restrictions and stress.

Shearing is the single most stressful management practice ewes are subjected to, so pre-lamb shearing in late pregnancy is particularly hard on ewes.

Mustering the ewes into the yards, holding them off feed and the significant increase in energy demand in the 10 days after shearing are all very stressful on ewes.

“We are taking ewes right on the knife-edge and shearing them three weeks out from lambing or putting them on the conveyor a few days from lambing and then we are surprised when we get high peri-natal lamb losses,” said Allot.

He encourages farmers to think about the timing of shearing in relation to feed intake, reproduction and animal welfare.

Similarly, set stocking going into lambing is a complex issue that can, if not managed correctly, stress ewes at the point of lambing.

“We need to think about alleviating stress and changes around that set-stocking event,” he said.

Allot says too often everything is done at once: ewes are taken off winter feed, walked and often held in holding areas off feed, then receive pre-lamb animal health treatments. They are then walked out to their lambing blocks.

“The change of feed type is enough of a stress let alone standing them off feed for a day while they are vaccinated or drenched,” he said.

He urges farmers to consider doing animal health procedures a month out from set-stocking or transitioning sheep onto their lambing blocks if they are a long distance from where the ewes have been wintered.

“Think about the stress and the impact it has on animals at such a critical time and think about ways to reduce that stress.”

Allot advocates farmers use a fence-at-the-top-of-the-cliff approach to animal health, rather than using vets as the ambulance at the bottom.

Animal health plans, tailored to the individual farm, take a proactive and long term approach to animal health with a focus on productivity and profitability.

Allot says in the North Canterbury area where he practices, he’s been involved in the development of 70 active animal health plans for sheep and beef farmers and these are used to inform livestock management decisions.

While animal health plans are a requirement of some processors’ compliance programmes, he says they can add real value to the business by identifying current and potential animal health issues and making a plan to manage them.

Allot recommends farmers talk to their vets about working together to develop an animal health plan for their business.