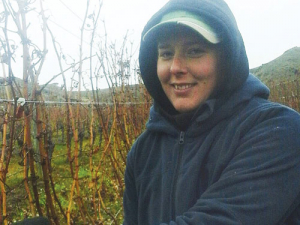 The 2018 Young Viticulturist of the Year, Annabel Bulk, at work pruning vines on the Felton Road vineyard at Bannockburn. SUPPLIED

Bulk, an assistant viticulturist at the Felton Road vineyard in Bannockburn, Central Otago, has been named Young Viticulturist of the Year 2018 – only the second woman to win the title.

Runner-up last year, Bulk excelled in practical and theory modules in a competition held at Martinborough in late August.

Back at work in Central Otago, Bulk explained that the contest included interviews, a project presentation and a speech, and physical modules such as pruning and trellising – a very physical activity entailing posthole digging and wire straining.

“Obviously it’s meant to be challenging – that’s the point,” she told Rural News. “So you walk away from it feeling as though you’ve done a huge workout.”

Bulk, who was raised in Dunedin, says her love of the outdoors, of conservation and nursery work, is what brought her to the industry. She studied viticulture and winemaking in Marlborough, and has completed a Lincoln University viticulture degree.

She has now been working nearly seven years at Felton Road.

“I had to finish off my degree by doing some vineyard work experience and pretty much haven’t left.”

Bulk says there is a huge diversity of work to be done at Felton Road, as the vineyard is run on organic and biodynamic principles. “It keeps everything interesting and keeps you learning.”

Felton Road’s biodynamic methods include making their own compost and foliar sprays, and breaking down cow manure to create “an intense microbe inoculate” to encourage soil biology.

Biodynamics is essentially about looking after what is both above and below ground, she explains.

“We are focussing on trying to get a complete living biome around us, and that includes loving and looking after the soil and what’s happening underground as well as looking after the vines and the biodiversity in the vineyard itself.”

Winemakers like to talk of the “terroir” of a wine – a character derived from the land the grapes were grown on.

“You’re trying to create something of the land and of your parcel that you come from,” she explains. “So we’re looking after that and trying to create a healthy soil where everything leads on from that.”

Bulk says her goal for the next two or three years is to pass on her passion for the industry.

“I want to be able to focus on training and teaching the next lot of young viticulturists coming through.”