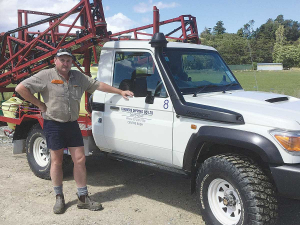 RCNZ president David Kean says ag contractors are only able to provide services that are essential to supporting food production during the lockdown.

“That’s the vast majority of our work and many of us are still flat stick with work including maize production, grass harvesting, sheep dipping and other tasks.”

Many agricultural contractors report that their operations are still in full swing, with maize cropping and grass harvesting, in particular, still to be completed.

A number of contractors around the country are dependent on mostly Irish and English contract recruits to fill out a shortage of skilled machinery operators. Some of these have left for home as the COVID-19 crisis bites, but many still have a month, or more’s work and are opting to see that out.

RCNZ chief executive Roger Parton said the Approval in Principle to bring in operators for the 2020/21 season was progressing.

As for the risks posed by COVID-19, Kean says contractors were taking the same sorts of precautions as most employers, urging use of hand sanitisers and soap as well as encouraging staff to take leave if they felt unwell.

He noted that contractors were at much less risk than many people.

“We’re often working alone a lot of the time and effectively that’s self-isolation.”

Kean pointed out that both farmers and contractors need to be aware, that contractors are only able to provide services that are essential to supporting food production over the next month.

“This will include crop protection and grass production, but not at this time spraying a paddock of thistles.”

Contractors were also facing pressure with maintaining skilled operators some of whom had returned home early to Europe. However, she said Kiwi operators from industries such as forestry seemed to be more available than previously.

Slattery says rural contractors expected to be affected by COVID-19 but less than other sectors.

“Farmers have to keep going as they are an essential industry and we have to support them.”

Meanwhile, Kean says the RCNZ Board met via an urgent video conference last month to consider a range of issues arising from the COVID-19 crisis.

“We took the decision that putting off the conference for a year was the only option. We will look to have the conference in June 2021 in the same Rotorua venue.”

He says the RCNZ Board has also halted its plans to recruit a new chief executive to replace Roger Parton, who was due to retire in September.

“We were just about to start advertising but in the current circumstances we felt it was best to put a hold on a new hire. Roger confirmed he could stay on for a year to provide continuity through the Corona crisis and we’re very pleased to retain him.”