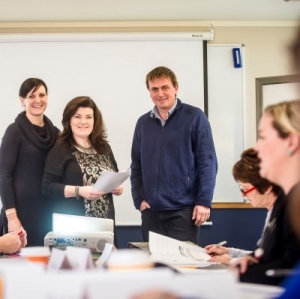 PARTICIPATION IN THE Agri-Women's Development Trust (AWDT) programmes and workshops will more than triple this year.

New offerings have been established to meet the needs of industry organisations and their members.

A thirst for new skills and will to contribute to New Zealand agriculture is driving demand for personal and professional development, says the trust formed to help create positive change in the sector.

Since its creation in 2010 by founder Lindy Nelson and patron Mavis Mullins, the AWDT has delivered leadership, governance and business training and support to more than 630 people throughout New Zealand, with support from industry.

"Agriculture's greatest asset is its human capital and 50% of that capital is women," AWDT executive director Lindy Nelson says. "Their skills are usually gained by default, not design - we are changing this by providing targeted development to help women meet the demands of farming businesses. Building this capability aims to create change agents to help achieve Government's goal of doubling agricultural sector exports by 2025."

Nelson describes the appetite for leadership, governance and business training specific to agriculture as 'huge' with trust programmes being consistently oversubscribed. "We've only just scratched the surface in our first three and a half years and in doing so have re-confirmed the needs established in our initial research. Agricultural women want to step up – but need the skills, development and support to do so. When they get these, they make an instant impact."

During 2014 more than 500 participants will participate in AWDT programmes and workshops, a figure Nelson attributes to increased recognition of the value of women's contributions when they receive the skills and support they need. "Industry organisations are wanting programmes adapted for their women, and increasingly men, and we are working with them to create and deliver these."

One such programme is being piloted with 90 women in three regions in partnership with Beef + Lamb NZ. As its name suggests 'Understanding Your Farming Business' aims to raise women's aspirations as critical farming partners by developing their business know-how and confidence.

"We're finding that these graduates are more confident to engage within their farming business, apply new systems and take up other sector offerings," Nelson says. Early evaluations estimate that business changes being initiated by women on the programme could add up to $20,000 profit to the farm bottom line.

One of the trust's initial goals - developing women to train and support other women – has been realised. Escalator graduates Charmaine O'Shea and Hinerangi Edwards were appointed to AWDT's board last year, and three other graduates are now delivering the First Steps programme around the country.

O'Shea, a Northland chartered accountant and dairy farmer, stepped up to the AWDT chair's position this year and in March was named 2014 New Zealand Dairy Woman of the Year.

"AWDT aims to deliver on three promises; standing shoulder-to-shoulder with participants and graduates, keeping things real and creating positive change," O'Shea says. "As a graduate I have personal knowledge that these promises are central to the success of the programmes and are the basis of the overriding principle of supported growth – a concept that is the key to women's increased participation in our sector.

"Demand for development brings with it the challenge of keeping programmes widely accessible and affordable," O'Shea says. "We are working closely with industry partners that include ANZ, Beef + Lamb NZ, DairyNZ, FMG, Agmardt, LIC and CRS Software who are seeing the value of investing in agricultural people. Expanding this approach is vital to making programmes readily available to more women, wherever they may live."

Other tailor-made AWDT programmes include one currently under development for Landcorp Farming, and workshops held for the Dairy Women's Network and Rural Women NZ.