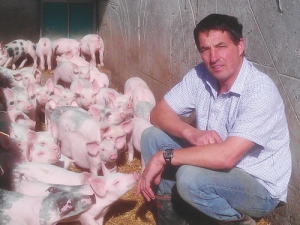 Imported fresh pork poses one of the biggest risks, and imports have increased hugely since the Ministry for Primary Industry (MPI) won its case in the Supreme Court on importing raw pork from countries with had porcine reproductive and respiratory syndrome (PRRS). Previous to that mainly only cooked pig meat entered the country.

Pork cannot come from a country with FMD. "But we all know that Europe trades across its borders extensively because they have a pretty open policy," Carter told Rural News.

"By the time it is identified that a country has FMD the meat might have already come to New Zealand. As soon as you put it into the market place in fresh form there's no mitigation whereas previously pork coming into the country needed to be processed into bacon or ham or pH treated which killed any viruses."

Food regulations say you can't feed waste meat to pigs without processing or cooking but that is not policeable, says Carter.

"Even the ministry recognises it is unmanageable because there are many backyard pigs in NZ," he says.

Somebody feeding infected imported waste raw pork from a local restaurant to backyard pigs poses one of the biggest risks of FMD entering NZ.

"If we didn't have any issue with backyard pigs then it is easy to manage 100 commercial farms in the country," Carter says. "But [the problem is] is the 5000-odd other farms that have pigs on them that we don't know about.

"Our frustration as an industry is they have opened up the borders to allow this product in on the belief that those farms have read and adhere to those food regulations.

"But I think there is a significant level of risk there. It is like providing us all with cars that can do 200km/h and telling us to do no more than 100km/h; if there were no police on the road how many of us would do it?

"They have created a law but largely the people doing it don't recognise the law. How many people know they are not meant to feed food scraps that haven't been processed to pigs?

"If those practices didn't exist the risk would be significantly lower. But we all know they do exist so we have to put in mitigation measures so that we can control it, where it is manageable.

"While that exists we feel the need to have a very tight biosecurity programme in place and what comes into this country needs to be tighter."

He says the border is the obvious place because we don't have regulations on where a food generator can get rid of their waste. The restaurants don't have to provide a certificate to say where meat waste goes, for instance to a certified processor.

Carter says there are too many gaps in the system. A fresh piece of meat can come in carrying viruses and how meat is handled rides on food regulations that people largely don't know exist.

"So we're asking, where is the benefit to NZ – compared to the risk – by letting this product in? Imported pig meat has been coming into NZ for years but what we're saying fresh product changes the risk profile."

Carter says there has been a huge increase in fresh imported pig meat since two years ago when NZPork lost its fight over the process used by MPI for import health standards. A lot of pork is coming from Spain which has PRRS.

"Twenty two countries are exporting pig meat to NZ now so the more meat that comes in the greater the risk [of our exposure] to FMD.

"All the money we have save from having free trade agreements could be given away in one incursion of FMD and our trade borders would be shut because they wouldn't allow us to export our primary products."

The FMD outbreak in the UK in 2001 involved by-products of meat sent to piggeries, says NZPork chairman Ian Carter.

"Given that NZ has a lot of backyard pigs and a lot of waste food is fed to backyard pigs, meat coming into the country [carrying diseases we don't now have] obviously increases the risk of infected product being fed to a pig.

"The benefits to NZ Inc [of free trade] need to be offset by strong tightening of the biosecurity systems to preclude that risk. We all know FMD would [greatly harm] the economy of NZ if it came in."

Consumers should also be aware that if product that comes in doesn't have to meet NZ's animal welfare standards, it won't, he says.

The EU doesn't have the same level of animal welfare standards as NZ.

"From an industry perspective we respect the need for free trade and we respect the options the consumer should be given to choose what they want to purchase," says Carter.

"But we don't [insist on incoming] country of origin labelling so the consumer can't identify where the product has come from.

"Most consumers in NZ think we produce all the meat we need; they don't realise that 57% of pig meat being consumed in NZ is now imported."

All the industry can do is get their label out there – get it in the public's eye that if they see 'Pig Care Accredited, 100% New Zealand Pork' they know it meets our high NZ welfare standards and it's fresh, Carter says.