Claims of trouble at Alliance 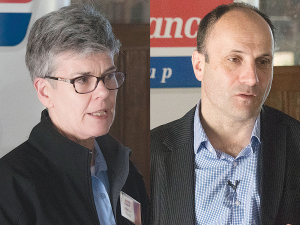 Big staff rumblings, safety issues and the likelihood of yet another poor result are claimed to be unfolding at the Alliance Group.

According to Rural News sources, the meat processor, which labels itself as New Zealand’s only 100% farmer owned meat cooperative, has now lost five members of its 10-person executive leadership in less than two years.

The latest loss was the shock departure of Heather Stacy, general manager livestock, who resigned earlier this month. Her quitting made a total of five executive leadership team resignations within the past 20 months under the controversial leadership of Australian chief executive David Surveyor.

Meanwhile, Rupert Mitchell recently quit as the Lorneville plant manager, meaning 100% of the co-op’s processing plant managers have turned over in the last few years.

Rural News is told this long list of senior executive resignations and departures can be blamed on the company’s culture, described as “seriously toxic” and in “free fall”. All this is being sheeted home to chief executive David Surveyor’s leadership style described as an “old-fashioned 1970’s, big stick style -- cancerous and bullying”.

Alliance’s board, including chairman Murray Taggart, have been accused of being “ineffectual” and are said to be well aware of Surveyor’s heavy-handedness. Many report bullying, internal culture issues, escalating recruitment costs and repeated calls for internal reviews.

Rural News understands Surveyor was brought into the meat co-op by Taggart as an experiment to shake up the sleepy processor. But many now feel the company is so damaged by his management regime that it may be irreparable. Several of these senior staff resignations were Surveyor’s own hires.

Industry insiders predict Surveyor is positioning himself for a quick exit. They point to a new, professionally written, LinkedIn profile of Surveyor, poor profit results and intense board scrutiny.

And there’s an issue in unravelling plant safety, especially in some of the co-op’s old South Island plants.

There are claims the company is struggling to get on top of asbestos and ammonia safety at these plants. The ammonia systems are said to be in such decay that they could seriously threaten local communities as well as the workers.

“Naturally, plant maintenance seriously bites into profitability and most of these plants are seriously antique,” the source told Rural News. “Surveyor and the board know these risks and are holding things together with plasters and nice press releases.”

The bad news does not stop there. Sources also claim that Alliance is reportedly making nothing from lamb and is weak in beef, pointing to what many commentators expect will be another “very poor” annual profit result. – Alliance response, p11