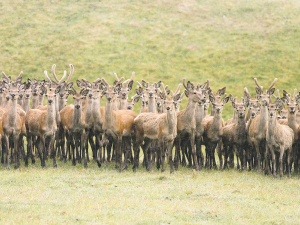 Landcorp is the largest deer farmer in the world and it says this side of the business has taken a big hit due to Covid.

The company made an operating profit of $65 million, with revenue up by $10 million to $251 million on the previous year. However, it was forced to significantly write down the value of its land and livestock.

Carden says a lack of overseas buyers for land, and concern about environmental regulations are the main reason for falling land prices.

“From our point of view the drop in these values is a book loss and doesn’t reflect the overall profitability of our business.

“On that basis the board of Pāmu agreed to pay a $5 million dividend to its shareholder, the government.”

Carden says Pāmu, like all farmers, felt the impact of Covid-19. He says it had quite an impact on its livestock business during the first lockdown because the company couldn’t get stock processed at the meat works and had to carry more animals for a longer period. He says the situation was also compounded by the drought in Northland, and in other parts of the country, but says they carried on as best they could in the circumstances.

The area of Pāmu’s overall operation worst hit by Covid has been their deer operation. This is because most of its product is directed at the food service sector – restaurants and other high end users especially in the USA and Europe.

“We are the largest deer farmer in the world and while the business has been going well for the past three years, it’s taken a big hit due to Covid,” Carden told Rural News.

“We are certainly concerned about the deer portfolio at the moment and are in the process of reviewing what is the right mix of animal species in the company going forward and that includes the percentage of deer we will have in our livestock portfolio.”

Carden says Pāmu's sheep and beef and dairy businesses have held up well despite the adverse weather conditions for much of the season. He says they have been able to maintain overall production levels.

“Dairy had a great year and they were well up on production despite the drought.”

He says Pāmu will continue to diversify.

“The horticultural developments we are doing we will expand – again to diversify land use and also to capture the growth in the hort sector. We will look at our land use change opportunities so our forestry portfolio will continue to expand.”

Carden says the state farmer will convert 1800 to 2000 hectares of forestry in the next four to six years on class 6 and above land.