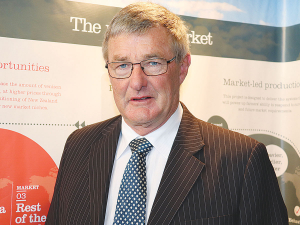 He says the industry has lots of positives: exports worth $350 million come from a base of one million animals.

The productivity lift on farm in the last few years shows the hard work by farmers moving things forwards. Coup attributes this to the ‘passion and profit’ programmes run by the industry.

“But we need to get our heads around sustainability and earning the respect of the policy setters and the voting public who elect them,” Coup adds.

Communication with the industry’s main stakeholders is essential, he said. “We can’t just tell people stuff. We need to meet with them and talk to them - have a conversation.

“The most successful work we have done in sustainability is where we have had one-on-one engagement with people.”

But Coup says the good news is that other farmers surveyed see the deer industry in a positive light.

He wants to raise the profile of the deer industry in the news media and focus on consumers of deer products.

“We have to form one-on-one relationships with the people who count in the value chain. We would like our customers to have a feeling about how their food is being produced in NZ and about the people producing it.”

All things in balance

He says the sector generally supports the intent of the Zero Carbon Bill introduced into parliament recently. But science must support the goal -- “facts not emotions” -- and he’d like to see the factual stuff supporting the mitigating factors.

Walker says he’s not aware of any specific science project on what deer are emitting. Because scientists know the size of the deer rumen they can calculate what they think should happen.

“I think the whole greenhouse gas thing is travelling faster than what the science is producing, particularly in the mitigating factors that would be important for producers,” he told Rural News.

“The technology is not there and they’re struggling to match up with public perception. There are lots of bits and pieces of science.

“But producers need to see what they are doing and see the ways they can offset some of the emissions, then they will act on that.

Walker disagrees with claims by the Prime Minister and Climate Change Minister that the Zero Carbon Bill will provide certainty to deer farmers. The problem is the mechanics of the bill, not the intent.