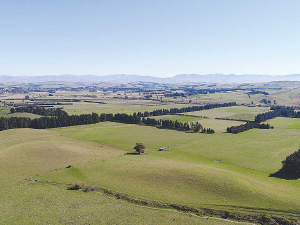 A drone shot of land near Waikari, North Canterbury, which is targeted by the latest irrigation plan for the district. Supplied/AIC.

The company issued a product disclosure statement (PDS) last month for shares to fund a revised Hurunui Irrigation Scheme. The PDS closed on November 28 and AIC says it received sufficient interest to advance to the next stage of design and development.

The proposal is for a 2000ha to 3000ha piped irrigation scheme to supply farms near the North Canterbury towns of Hawarden and Waikari. It is a smaller alternative to a scheme proposed by AIC earlier in the year, which did not proceed due to insufficient support.

The company says the revised scheme was developed through engagement with local farmers and builds on work of the community over many years. Water will be taken from an intake on the south bank of the Hurunui River and rely on consents held by the now-defunct Hurunui Water Project, which was taken over by AIC earlier in the year.

The area has suffered significantly from the impact of drought over recent years and it is hoped the irrigation scheme will bring opportunity and certainty to those farming in the area.

“We are excited to have passed the first hurdle and are another step closer to delivering a viable scheme to the South bank of the Hurunui River,” AIV chair David Croft said.

“While there is still much work to do before we can proceed with the option, it is heartening to continue our forward motion on the project.”

The company will ensure all its farmers hold farm environment plans (FEPs) and new irrigators will need to use efficient irrigation systems and have FEPs in place prior to being delivered any water. The FEPs specify the on-farm actions to meet good management practice.

AIC is a community irrigation scheme now irrigating 28,000ha in the Amuri Basin taking water from the Hurunui and Waiau rivers.