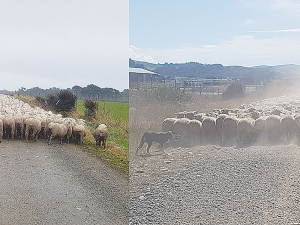 How fast it has changed: A composite photo of Westwood Farm hoggets - same mob on the same road - shows flooding in September 2021 and dust in March 2022. Photo supplied.

Coupled with Covid-induced staff shortages in freezing works and agricultural contractors, it is shaping up to be the perfect storm, says Southland Rural Support Trust chair Cathie Cotter.

"The ability for farmers to manage the current dry conditions is being seriously hampered by staff shortages created by Covid-19 in both the rural servicing industry and the processing companies," she told Rural News.

"Pasture growth and covers are well below average levels and many farmers are already digging into their winter feed supplies to keep stock fed while we wait for the rain."

On March 31, the Government declared the drought a medium-scale adverse event, which unlocks up to $100,000 in support, but farmers say it won't be enough.

Cotter told Rural News that one of Southland's problems is that it has always considered itself "summer safe" in that it always gets reliable rainfall right through summer, and that is a big draw card for farming in the province.

"But this year the rain hasn't come. I think we're down about 300mm on our average summer rainfall," she says.

Pastures have retained a semblance of green but nothing has grown.

"Our winter crops are way down on their yield, our swede bulbs need a really good drink and what is really concerning too at this time of year is that winter's chasing us," Cotter adds.

She says that the situation has been compounded by the borders being closed by the Covid pandemic, so agricultural contractors haven't had the usual seasonal influx of experienced workers from the likes of Ireland.

"I know some farmers have no supplements, and no baleage, just becasue by the time they got to their place in the queue to get their feed done, they either had to put stock in that paddock or the quality of that feed was diminished."

SRST and others are holding a series of meeting throughout the region to offer support and advice.

Cotter says it's a problem for younger farmers who may have had no experience of dry weather farming.

"They need that information. So, there's lots of technical information coming out through DairyNZ, Beef+Lamb and those industry groups to our farmers in an effort to support them."

"On our own farm, we would probably be about 1,500kg of dry matter per hectare behind where we normally are at this time of year," he told Rural News.

"We're in April now. So, we've only effectively got one more good month of growing to make up that deficit - which is looking very unlikely due to a number of reasons."

"People have got a lot more stock on farm that don't need to be, and with low feed it is putting real pressure and anxiety on the rural community."

On his own farm, near Wyndham, Rabbidge has recorded just 3mm of rain in March, following three dry months with probably about 25% of normal rain.

"We haven't made supplements because we normally have enough feed grown pasture to push forward, but we just don't have that option this year," he adds.

"In any other year, Southland would be fine if the works were processing at capacity. That's probably the biggest killer for us at the moment."

Anita Erskine, who farms sheep and beef at Papatotara, in the far southwest of the province with her brothrs Quinton and Eric on their Westwood Farm, says the effects if the drought will be long-lasting.

"The rams are about to go out, with the ewes in lighter condition than normal, so there is a high chance that next year's lambing percentage will be back, and this will affect the number of lambs to sell," she told Rural News.

"Beef and dairy cows will be lighter going into winter, and you do not usually put condition on stock in Southland in winter. Therefore, the cows may be lighter when they calve, which could affect next year's in-calf rate.

"The flow-on effect of this drought will not only be felt this year but for the next few years."