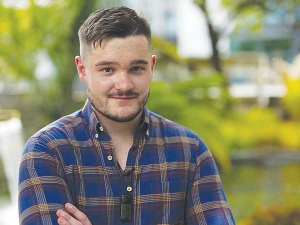 Logan Williams has come up with a way to use NZ wool as the fibre reinforcing in a range of injection-moulding polymers. Supplied/NZ Merino.

Williams, who's already had several successful inventions to his name, joined New Zealand Merino as its director of technology and innovation in late 2019. His brief is to find new markets for wool, especially low-value coarse wools.

He has now developed a process to combine wool fibres with various polymers for use in injection-moulding manufacturing.

NZ Merino has launched a subsidiary company, Keravos, with a purpose-built full-scale plant in Hamilton producing the wool-polymer mix in the form of small pellets. This is the standard form of raw material for injection-mould manufacturing around the world. It has the capacity of four tonnes a day.

Williams says it will put wool into industries where it was never thought possible.

Keravos is partnering with 17 companies so far to produce a range of items.

The pellets can also be converted into 3D-printing filaments for an even wider potential market.

Named in the Forbes magazine's "30 under 30" list for 2020, Williams has previously developed a method of producing biodegradable materials from didymo, polarised contact lenses for people with photosensitive epilepsy, a medical nebulizer and a methane-handling system taken up by Fonterra.

Williams is scheduled to speak on the wool/polymer development at a major agribusiness event, E Tipu 2021: The Boma NZ Agri Summit, to be held in Christchurch next week. Though not giving too much away, he is promising to have a major new wool-polymer product on display at the event.

The company has also developed a biodegradable version by using a corn-starch derivative as the polymer component.

However, Williams says wool could be mixed with whatever polymr a customer wants. "We can pretty much mix it with any polymer on the planet."

Williams says extensive independent testing has shown that the wool mix is about 20% stronger in both impact and tensile strength between 10% and 30% lighter than polymer alone. If it's biodegradable, it will biodegrade faster with wool in it.

It also has what he calls a "very cool" veneer. The product is about 20% wool on weight but 70% on volume. "Wool's quite light so that 20% weight sounds like nothing," he explains. "But when you're looking at the product and looking what's going in, it's actually a huge amount of wool."

The product was developed primarily in search of a way to use coarse wool, which otherwise has a very low value, and pay a good price for it.

"Our aim is to try and make it profitable and not just like scraping the barrel. It's actually making a decent profit from wool."

Williams says they coud use any type of wool.

"Ideally we take the cheapest wool off the farmer because we're fixing the price at $3/kg for the first two years and $5/kg after that. And we take any type of wool - so dags, bellies, side pieces," he told Rural News.