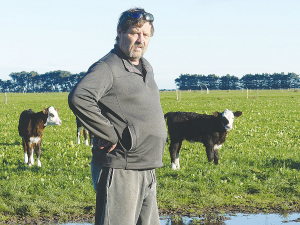 Peters, who milks 1,400 cows all year-round on the family farm told Rural News that a recent University of Otago study that found the Government's response to the 2017 Mycoplasma bovis outbreak was poorly managed and inflicted significant and lasting trauma on farmers was on the mark. The two-year study included extensive interviews with farmers impacted by M. bovis in Southland and Otago.

Peters told Rural News that he would expect similar anecdotes from farmers whose stock were ravaged by the disease.

"It's an interesting report. If the reserchers come to Canterbury they will find the things that happened here are identical to what happened in Otago and Southland."

He says it's all good for MPI to admit that things could have been handled better but it doesn't solve the trauma that they put farmers through. "MPI talks about how they have improved the process but some farmers are still waiting for compensation, and what about the mental anguish they are going through?"

Peters says to this day, he doesn't know what technical incursion means and why he was forced to cull all his animals. Prior to culling, his cows were producing on average 480 to 500kgMS annually. The replacements are doing arund 440kgMS right now.

On compensation, he says MPI has paid him "a bit of compensation" in 2018 and last month. He says MPI isn't transparent enough and decisions made in Wellington make no sense.

A lot has changed - MPI

“We have worked really hard to support the wellbeing and recovery of those impacted by M. bovis.

“Since 2019, compensation is getting out quicker. In May 2021 it took on average 12 working days to pay a non-complex claim, in comparison to an average of 37 working days two years ago.

“Testing is quicker. We have brought the wait-time down on test results to on average 14 days or less.

“And we work closer work on the ground, supporting affected farmers, their whanau and workers.”

Anderson says it will continue to work with partners, Dairy NZ and Beef and Lamb NZ to make improvements where required.

“We know the eradication effort has been challenging for the farmers involved and even when the process goes as intended, it is tough for those affected.”

Anderson claims the Otago University study authors have not provided a completed report of their work to MPI, which is disappointing.

In total, $207.4m has been paid out in compensation to farmers.

Funding boost to empower women to farm for the future

John Roche, chief science advisor at the Ministry for Primary Industries (MPI), reckons despite all the local and international challenges facing the New Zealand farming sector, it has a lot of positives going for it.