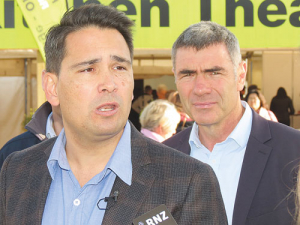 National Party leader Simon Bridges says the biggest challenges farmers face are the environment and their right to farm.

He told a Fieldays audience that New Zealand must stay true its values by keeping the environment pristine while at the same time growing the primary sector.

Huge economic opportunities exist in the primary sector and NZ farms better and more efficiently than any other nation’s farmers, he said.

But he sees a difference between the Labour Party and National on such issues.

“I made it clear that when I became the leader we would have a priority on the environment and focus on that. The contrast is that National wants to be responsible,” he told Rural News.

“We want sensible, practical policies and we need to shy away from the extremities that will mean a lot more cost to the economy and a lot more cost to hard working Kiwis too quickly. This is in the interest of all New Zealanders who don’t need extra costs piled on them.”

The latest MPI outlook report shows significant growth in the primary sector and it predicts this will continue. Bridges agrees the future looks positive and says the country needs to bear that in mind.

“There is a lot of talking-down of farmers by the Government -- be it climate tax, capping of cow numbers or ill-conceived comments on irrigation. We don’t want to be in that space. We know farmers are great for our economy but they are also real conservationists and environmentalists who understand and get it.”

Bridges acknowledges that some farmers let the side down with poor environmental practices. But others are leading the way in sustainability and efficient production.

“There will always be those who are a bit behind that and it is a challenge to make sure everyone is getting up to best standards.

“My message is clear, when we look at the principles we need to apply to farming as it pertains to climate change. Technology and innovation is at the top and a National-led government will invest more in those areas.”

Bridges says NZ has shown great leadership in this area and he singles out the research of methane emissions from agriculture. But he adds that we can’t rest on our laurels because we haven’t found all the solutions yet.

“The danger is that with bad government policy you will see our farming being done offshore where they don’t have such environmental restrictions,” he claims.