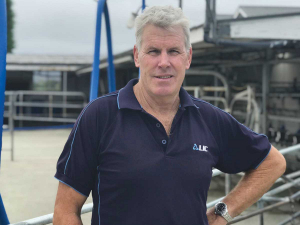 The Waimea Community Dam, due to be commissioned in February 2022, will release stored water from the headwaters of Lee River to the Waimea Plains. It’s set to be a boon for pipfruit, which already generates high returns from a scarce supply of flat land in the region.

Together the farmers run less than 800 cows and King said livestock’s shrinking footprint on the plains was a natural migration of land use.

“Pastoral won’t foot it; you just won’t be able to sustain it,” he told Hort News. “There used to be significantly more livestock in the area and all that’s happened is that as land has become more valuable, people have moved into higher and better uses.”

King said the scheme was looking at ways to possibly expand irrigation outside the existing “zone of benefit” but there was not a huge amount of vacant land available.

Water shares were currently valued at about $6300 each – up $1300 on the original value of $5500. That’s an increase of about 15% on original values and water users will also have to pay annual charges of just over $600/ha per year.

“The important thing to remember here is that (Super Fund) bought an orchard with access to reliable water, that’s what it comes down to,” King said.

Easton Apples was part of a group of 14 agricultural businesses, Century Water Ltd, which 18 months ago committed $11.5m to keep WIL afloat, just when it seemed the proposed dam would be sunk by cost increases and a lack of support from Tasman District Council.

King predicted Super Fund investment would attract more interest in horticulture in the region, even if there was little land left for development.

“They do a significant amount of due diligence and they’re very thorough in their decisions – and at the end of the day they’re protecting other people’s money so they won’t be making rash investments.”

Only half of the amount of water stored in the scheme will go to irrigation. The balance would go toward urban supply and environmental projects “for the benefit of the river and ecosystem.”

The scheme was designed to maintain minimum flows in the river, in much the same way that Opuha Dam did in South Canterbury. About 30% of the stored water was for the benefit of the environment and for recreation, King said.

Proud of another strong result