No issues for us 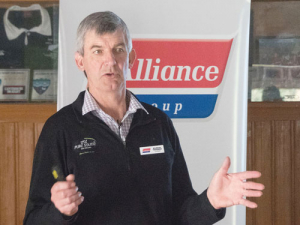 Read: Claims of trouble at Alliance.

Speaking to Rural News from overseas, Taggart said the claim about Alliance facing another poor year financially was one of the more “puzzling” allegations.

“Actually, we are tracking better than last season and the last numbers I saw show us tracking ahead of budget,” he said. “Beef is doing significantly better and lamb also looks to be pretty strong.”

Meanwhile, Taggart dismissed any talk of a ‘toxic culture’ at Alliance and/or claims that he and his board are ignoring problems with the management style of chief executive David Suveyor. He says there are “definitely” no concerns at board level about this.

“Yes, we have had those people leave, but all for different and genuine reasons,” he told Rural News.

“Those people – and everyone who departs the company – have conducted exit interviews. All have offered different reasons for leaving and no one has raised any issues.”

Taggart says the turnover of plant managers has included two who retired at age 65, and other plant managers have been promoted. This shows that talent is recognised and rewarded at Alliance, he says.

“Two of our plant managers are women, which is not common in the meat industry and something we are extremely proud of.”

Taggart says they don’t pretend they get everything right all the time. But he claims company culture reviews “have been done from the executive team down to the boning room floor” and show it has a “good set of values”.

He puts this down to management by Surveyor and says since he began as chief executive at Alliance in January 2015 this has steadily improved.

Taggart says the board has heard no reports on any negative aspects of Surveyor’s management or style.

“Most of our directors are farmers who live and interact in the communities where our plants operate,” he said.

“There has been no messaging back about any concerns on this front.”

In fact, Taggart believes that ever since Surveyor took over at the co-op, shareholder and staff support have increased for the transformation of the business, including better staff safety, adding value to product, investing in the marketplace and upgrading plants and technology.

“During this time, our profitability is up and so is our competitiveness in the marketplace.”

Meanwhile, Taggart is confident that Surveyor is not also about to depart the company. “Well, he hasn’t told me. Why has he said something to you?” he joked.