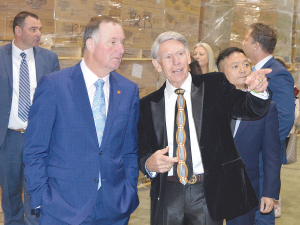 He says science will provide answers to methane and nitrate emissions over time. Until then a tax should be out of the question.

“While large amount of greenhouse gas emissions in the agriculture sector come from methane and nitrate emissions, the reality is that at the moment we don’t have answers to that,” he said.

“Science will provide answers over time but if we expect our farmers to just pay another tax for no particular reason, what’s that really achieving?

“I think our farmers have historically shown that they are very good at adapting and taking up good technology -- paying their way when they can.”

Key says he’s not sure what a tax on emissions will achieve right now.

The Labour-led Government’s Interim Climate Change Commission (ICCC) recommended that agriculture be brought into the Emissions Trading Scheme (ETS) from 2025 at a 95% discount rate, meaning farmers would pay only 5% of the cost of their emissions.

But National’s policy on this issue was that farmers should only be brought into the scheme if the agricultural sector “met certain conditions”, ie increased productivity levels and finding the science to make continuous improvements.

Key says while NZers care a lot for the environment, they also care about making sure people have jobs and the country remains an efficient food producer.

“The challenge is to marry the two together,” Key said.

And he is also worried about other challenges facing the farming sector: global trade wars, increasing on farm costs and volatile commodity prices.

Key says agriculture remains the backbone of NZ and the country needs our farmers to succeed.

On Fonterra, Key said it was disappointing that the co-op wouldn’t be paying a dividend this year. He hopes Fonterra will come right with the new chief executive Miles Hurrell at the helm.

“Ultimately, Fonterra needs to be strong because they are our global champion.”

Key said he is no longer invested in Fonterra units.