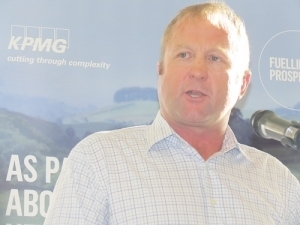 Petersen travelled to India in November with Pipfruit NZ looking at more access for growers. He says there and around the world you could see the demand for apples, particularly because of a small harvest out of the US.

"Have no fear, agriculture, horticulture, agri-food -- whatever you want to call it – here in NZ is extremely bright. The fundamentals are extremely strong."

Many people had been talking about the need for greater value in the agri sector for a long time. But many companies operating out of NZ are exporting higher value products than many people give them credit for, Petersen says.

"But there are real barriers in getting added value products into markets around the world."

Tariffs for example: if you want to send a tonne of beef into Korea the tariff is 40%. Beef is priced at about US$5500/t but a 40% tariff adds about US$2200/t before the importer can start selling the beef. Petersen says while the importer pays the tariff – and actually writes the cheque – the producer also pays towards that cost.

He says all the studies show that the benefits of reduced tariffs into markets are shared equally between the producers and the consumers of a product.

"But we still had first mover advantage. We have had the opportunity to build relationships and partnerships in China that will stand the test of time.

"When we talk about an upgrade it is important to keep us ahead of the pack. I have no doubt we will see some upgrade, based on the history, trust and relationship we have developed since the FTA was put in place."

Petersen believes the Australia-NZ FTA is among the best. And in 12 countries in SE Asia we effectively have tariff-free access into most markets, dropping down over time.

He is big on these SE Asian economies.

"We are seeing many examples – Vietnam, Indonesia or the Philippines – and many other SE Asian nations where there are massive opportunities and they are the right size for NZ companies."

Petersen has pushed hard for the TPP (Trans Pacific Partnership) because of the need to start looking east again across the Pacific.

"We've got to try to round ourselves off across Asia Pacific....TPP does that and some other really good things."

He says it would have been crazy for NZ to have walked away from the deal.

"Most of the countries in TPP don't want NZ there because they know we're competitive, they know we have quality products, that we want to export, that we have more cross border trade than the other countries. The other 11 would say 'bye-bye NZ'.... We are actually happier now.

In his view the TPP will go through.