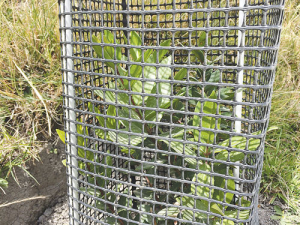 This topic will feature at the East Coast Farming Expo at the Wairoa A&P Society showgrounds on March 6 and 7.

“A grant rate of up to 75% is available this year from the Erosion Control Scheme (ECS) for activities that will help to keep productive soil on the hills and out of waterways,” he said.

“Depending on the situation and type of country, funding may be available for tree planting, fencing, associated weed and pest control and in some cases earthworks and structures.”

Manson says this is the highest grant rate made to hill country land owners in 30 years and demand is strong.

“It is likely the grant rate will lessen in the next year or two so the funds can be spread over more properties, so now is the time to get in.”

He says improving water quality in Hawke’s Bay is a key driver of the fund.  But keeping organic matter on the hills is also important for pasture production and to store nutrients and soil moisture.

“While excess nutrients such as nitrogen and phosphorus are important on the easier country and flats, sediment is a more important contaminant of rivers flowing out of East Coast hill country. That same sediment often represents loss of productive potential,” Manson says.

“Some ECS work will include fencing and planting around waterways and native bush areas, which will add biodiversity benefits such as protection and creation of indigenous habitats.

“There are some criteria to be met including an assessment of the erosion risk, completion of a simple erosion control plan and finally getting the application approved for funding. Wairoa staff at the HBRC office can help with all of these.”

Another incentive designed, in part, to tackle erosion is the One Billion Trees programme; and it’s not just focused on pine trees, Heath says.

“The challenge for farmers is to identify what is the right tree for them and their farming systems,” he says.

The expo is also an ideal venue for launching new products or releasing new research and technology straight to the target audience. Farmers and landowners can explore new ideas and have their questions answered by experts on the ground.

“If you are a Hawke’s Bay or East Coast farmer wanting to keep your business moving, or an agricultural innovator wanting to spread your message, this event is perfect,” says event director Dave Martin.

Details of the popular evening Muster will be announced soon; the event enables expo attendees and exhibitors to socialise with presenters and keynote speakers.

For more information on the expo or to buy tickets go to: www.eastcoastexpo.co.nz