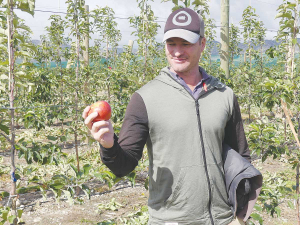 Ngāi Tahu Farming has ordered tree stocks for planting a trial orchard in the Culverden/Balmoral area in 2021. The initial 15ha commercial pipfruit orchard could be the first in the wider Amuri Basin.

The area is known for long, hot, fine days and low rainfall.

Local farmers have been known to grow fruit trees successfully for home consumption and it was partly this knowledge that prompted Ngāi Tahu Farming to consider trialling horticulture as an option in the area.

Ngāi Tahu Farming has at least 9000ha of pine forest and beef in Amuri Basin, but it has been looking at alternative land-uses for several years.

A Plant and Food Research study found the local soils and temperature extremes could potentially suit a range of horticultural options.

Ngāi Tahu Farming business development manager Ben Giesen told Hort News that following the Plant & Food study, data showed one limiting factor for orcharding in Amuri Basin was the relatively short number of growing temperature days. The data indicated Culverden was at the lower end of the accepted range, meaning the fruit would not grow to the size it did in other regions.

An ongoing trial, now in its third year, is showing positive signs across a range of horticultural crops being trialled.

The trial trees did reasonably well in the first year, though it was soon apparent the orchard would need better water infrastructure and wind protection to thrive, Giesen said.

In the second year of the trial the focus turned to apples as the company planted Envy, Jazz, Galaxy, Lady in Red, and some berries, nut trees, stonefruit and olives.

The following year Ngāi Tahu Farming and its advisors started monitoring growth rates to get hard data about how these trees perform in the area. Growth rates varied from 600-800mm, with the majority between 700-800mm.

By then the trees were doing well and the company felt confident it was planting in the right conditions. About four months ago, Ngāi Tahu Farming asked itself the crunch question, could an orchard be commercially viable?

After an extensive search, the new orchard developers managed to secure about 40,000 trees for 2021, enough for a 15ha site.

Giesen said they would initially have enough tree stock to plant 15ha. Apples would be the initial focus, but stonefruit was also a possibility and the company was taking advice on production and pathways to market.

Final requirements to allow the trial block to run as a commercial orchard have finished, including the installation of an Orchard-Rite wind machine to counter the area’s biggest orchard risk – frosts.

The installation of NIWA weather monitoring stations, in key locations, will allow data to be collected to help mitigate other potentially damaging climatic risks – such as Canterbury’s infamous nor-wester winds.