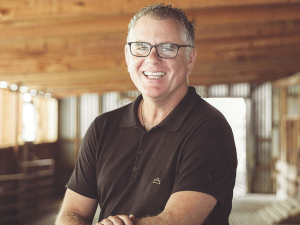 Every time you wash synthetic clothes, micro fibres of plastic are washed into the waterways, says Devold Wool Direct general manager and member of the International Wool Textile Board, Craig Smith.

He presented a petition to Agriculture Minister Damien O’Connor this month asking for a law change so that any garment with less than 50% of natural fibres must carry a warning on micro fibres.

“If a garment came into the country and it was less than 50% natural fibres then a warning needs to go on that garment to let people know what they are buying,” he told Rural News.

“People don’t understand that when you go and buy a garment made from petro-chemicals, every time you wash it little beads of plastic come off and go into the waterway.”

Smith told Rural News the petition was first launched in Italy by Giovanni Schneider, chief executive of the Schneider Group, an international natural fibre company. It was raised at an executive meeting of the International Wool Textile Board

Schneider is now trying to get the petition through Italy and he has challenged all the other member countries of the IWTO to get it brought into law in their own countries.

“So that is what I am doing,” says Smith.

“I met with the Campaign for Wool and the Minister for Agriculture last week and now I am dealing with MPI and getting the right vehicle and the right way to put it in front of government to get it made law.

“It is hugely important we tell our consumers what their garments are made of and put a warning label on garments to say ‘this garment is not 100% natural and every time you wash it micro plastics will do down the drain and into our waterways’.

“Every second day you see a whale or a fish being washed up with a stomach full of plastic and stuff. So it is really making people aware of what is going on in the marketplace. It’s part of an international campaign to draw attention to the issue.”

The micro plastics can make their way through the food chain into human digestion.

Smith says this is another way the Government can help the environment and he thinks it should sit high on the Green Party’s priority list.

“They could say it was something that was good for the environment but also helping the wool growers of New Zealand.

“The crossbred industry can do with all the help it can get at the moment.”

He says it always astounds him that people lay synthetic carpets and let their children or babies on it with the amount of VOC (volatile organic compound) gases that are released.

“Also we pride ourselves on having good sports teams and really looking after them but they all go out and play in plastic garments made from petrochemicals or synthetics. That is not good for the player or the environment. It astounds me what they are doing.”

The environmental qualities of wool need to promoted, he says. Wool is recyclable all the way through.

“Wool has so many benefits and we as an industry need to take responsibility and say we forgot to tell people how good wool is.

“We need to take that on the chin.”

NZ growers get behind campaign

About 80% of wool growers in New Zealand are paying a Campaign for Wool levy, says Craig Smith.

“It is voluntary. With that money we are looking to get the best value we can,” he says.

Education programmes are being held for Year 6 and 7 children in North and South Island schools.

Prince Charles has signed on as patron for another few years.

“He does a lot more for us than people realise,” says Smith.