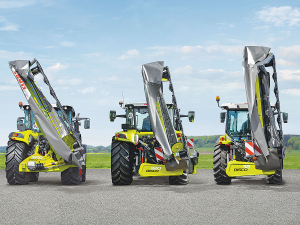 Available in six widths from 2.2 to 3.4m, the Disco 10 incorporates the MAX CUT cutter-bar, a feature that has been progressively introduced across the entire range of Disco mowers over the past five years.

The cutter-bar features a wave-shaped mower bed, press-formed from a single piece of material, with the cutting disc positioned further forward, ensuring the largest possible overlap between each disc, to deliver optimal cutting quality under all conditions.

CLAAS Harvest Centre National Sales Manager – NZ, Roger Nehoff, says, “the special shape of the skids and the large channel between them creates a dirt-repelling tunnel for cleaner harvesting, while the bolted design of the bed and permanent lubrication of all drive components simplifies maintenance and guarantees dimensional stability and longevity.”

All models include features for easy maintenance, easy transport and safe storage, including a safety module and quick blade-change system. “In the event of a collision, the safety module shears at a pre-determined breaking point but the cutting disc is held in the module by an axial bolt and cannot fly off,” Roger says. “The module can be replaced easily and quickly.”

In the JCB area of the site, the Loadall Series III range comprises six models with lift capacities from 3.2 to 5.6 tonnes and a maximum reach of 6 to 9 metres. Roger notes that a new cabin, at 12% larger and 50% quieter than the previous model, raises the bar for comfort and functionality. “It features the same adjustable steering column, control layout and function-grouped switches found in JCB Fastrac tractors and wheeled loaders, making it easier for operators to switch from one type of JCB machine to another and to use each in the most productive way possible,” he says.

A wide opening door and adjustable push-away steering column with a working position memory make it easy for operators to enter and exit the cab. A seat-mounted joystick and control pod configuration is standard in the Agri Torque Lock4, Agri Super and Agri Pro specifications.

All models are equipped with the 4.4 L JCB EcoMAX engine that delivers 109 hp or 125 hp, with high spec models delivering 145 hp from a 4.8 litre variant. Transmission choices include a four-speed manual, four-speed automatic, torque lock and a combined dual hydrostatic/powershift model.

The Auto Smoothride System engages at speeds of over 4 km/h, improving load retention and comfort when travelling at speed on roads and in the field. Meanwhile the high capacity hydraulic system delivers a flow rate of 140 L/minute for rapid boom operation.

Harvesting specialist Claas has only taken a little over three years to produce its 100th Jaguar Terra Trac-equipped harvester, which was first previewed as a prototype at Agritechnica 2017 before its commercial launch in late-2018.