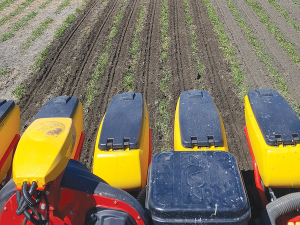 Many agricultural contractors use off-the-shelf machinery to deliver their services, but others ingeniously modify such gear or design bespoke implements to fulfil a particular need.

For example, Paul Linklater, of Agrilink Contracting, Palmerston North, in 2012 set about designing a system to reduce establishment costs in the rapidly expanding fodder beet sector.

Working with Beef + Lamb New Zealand, Linklater designed and manufactured a strip tillage machine able to achieve a satisfactory seedbed for beet in one pass and handle the wide range of soil types found in NZ.

The current machine, now with intensive testing and many thousands of hectares of work behind it, follows that original 2012 layout.

Up front, a set of disc coulters cut through any surface trash or plant residue. This is followed by a bank of ripper tines to break up the subsoil and remove any compaction.

The next module of the machine sees an enclosed tunnel/hood configuration that houses a powered rotary blade layout. This produces a 200mm wide band of worked soil, leaving untouched and uncultivated bands between each worked area.

At this point, fertiliser can also be incorporated if required before the band of cultivated soil is firmed by a packer roller to produce the ideal medium for planting small seeds. At the rear of the unit, a Vaderstad Tempo precision drill plants the crop, with slug bait also available at this stage.

Development trials of the band tillage machine were done at the Lincoln University Demonstration Farm near Christchurch. The aim of the trial was to reduce overall establishment costs by 30% and to push yields to 35 tonnes DM per hectare.

With a difficult trial season – limited rainfall and summer heat -- overall yields were significantly depressed, but similar results came in for conventional and the test establishment regimes.

Interestingly, the trial showed that the strip-till process followed by banded fertiliser and spraying applications make for the lowest cost of growing a fodder beet crop: only 11 cents per kg of DM produced.

Linklater says that after six growing seasons and many thousands of hectares planted -- at lower establishment costs – the strip tillage machine is seen to achieve better moisture retention. So in a dry season, growers could delay planting to await ideal conditions.

“It’s hard to be specific about crop yields compared to conventional planting techniques as there are many variables from season to season. However, given similar yields, this system offers a lower cost per kg of DM produced as establishment costs are so much lower.”

Two machines are available: the P3050 offers 500mm spacing for crops such as swedes or fodder beet, or the P3075 unit said to be ideal for maize, sweetcorn or squash.