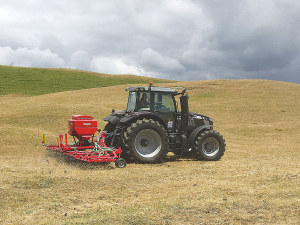 The Einbock Pneumaticstar unit is imported and distributed by Tulloch Farm Machines.

The theme of the day was alternative and less disruptive methods of cropping and re-grassing, focussing on reduced establishment costs and yield comparisons. It also considered environmental impact, legislative changes, local issues and public perceptions of farming practices.

“We wanted to look at alternative methods, taking a proactive stance, rather than wait to be told or forced to find another method,” Richards told Rural News.

The key alternative discussed was the Einbock Pneumaticstar unit imported and distributed by Tulloch Farm Machines. The machine is based on the Austrian company’s well-known Grass-Manager harrow with an integrated pneumatic seeder unit.

Used on its own, the unit can be used to reinvigorate tired pasture by combing out moss and dead thatch, allowing air to get to the upper layers of the soil. However, when used with the seeder unit it becomes a useful, low cost tool for repairing worn or pugged areas, re-seeding, break crop establishment, or to sow into cultivated ground and sprayed-out paddock in the right conditions.

With a 6m unit weighing only 870kg, the system lends itself to the smaller tractors of, say, 90-100hp typically found on most dairy farms. Transport is easy with the unit folding to 3m.

The seeding unit itself comprises a 300L (or optional 500L) hopper with electrically metered rollers that in turn use air flow to deliver seed to 8 deflector plates that deposit seed across the full working width.

Richards said he had recently seen swede crops established using the system. He summed up the day by commenting that the Einbock, in addition to reducing wind or water erosion, also can sow a wide range of seed types in many situations.

“The team found it easy to set up and operate, while the simple distribution system delivered the seed evenly over the full working width. In our opinion, this allowed seeds to access nutrients, water and sunlight effectively, while also removing the problem of weeds establishing themselves between conventionally drilled regular rows,” he added.

“While there is no ‘magic bullet’, we believe the Einbock has a place in a farm’s armoury, particularly if environmental issues such as erosion are a concern. It’s a tool we would be happy to recommend.”