Demo farm to show how Europeans do it 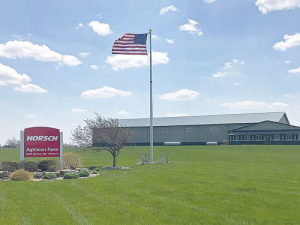 Hoping to encourage more discussion with farmers in the US, German arable manufacturer Horsch is now running another agricultural demonstration farm.

AgVision will help develop the Horsch brand in North America and focuses on key agricultural topics important in the US market. It will also create a centre of expertise where farmers can talk with Horsch staff to better understand the company’s knowledge base and get experience of machines in use on the farm.

The 66ha farm is in the ‘corn belt’ of the US, in an area well known for growing mainly soybeans and maize.

The company will expand the farm’s rotation to include sugar beet, wheat and rape under the guidance of farm manager Daniel Fulton who is also experienced in field test analysis.

The set-up also includes an administration building with a training room and a machine hall with an adjoining repair shop.

Already converted to controlled traffic farming (CTF), the farm will demonstrate Horsch’s knowledge of this and will look at the importance of soil and climate conditions.

Already in use on the farm is a 32-row Maestro 32.15m single grain seed drill, working alongside a Joker disc cultivator; these will be joined by more Horsch equipment such as a Leeb LT sprayer.

Although catch crops have not played a major role in the US until recent years, the farm will have a special focus on this. It is hoped it will help impart experiences from the European market and address questions.

The demo farm will also look at techniques such as single, precision sowing of cereal crops. Likewise, test plots will be planted to compare non-GMO seed with GMO-seed varieties already part of everyday life in US agriculture but heavily criticised in Europe.

Winning the war? BMSB in Georgia 2019

New Zealand Winegrowers (NZW) was part of a small delegation that recently visited the beautiful country of Georgia, in the Caucasus region between Europe and Asia.

More European dairy farmers are choosing to put their cows outdoors to graze.

Sarah Wilson, New Zealand Winegrowers’ Senior Legal Counsel, has had a busy six months since she began, with Brexit being one of her focuses.