A valuable, but poorly used resource 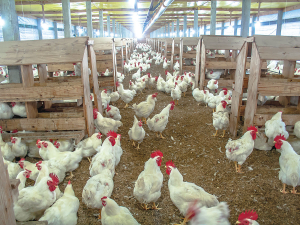 Typically, chicken growing facilities rear young chickens to slaughter weight for supermarkets in 40-45 days per year – about 6.5 times per year – with some producers achieving nine cycles.

This means that, at any one time, about 15 million birds are being reared for meat, with another 2 million or so egg laying chooks.

Given that each bird poops about 15 grams a day, this gives an annual total of 900,000 tonnes fresh weight of droppings per year in NZ.

Most chickens are reared in barns. So before each new cycle of chicks are brought in, sawdust is laid on the floor in a ration calculated to be about 8% of the weight of the droppings. With cages, the droppings are collected underneath and removed and mixed with fine wood chippings, typically once or twice a week.

The woodchips are used to raise the carbon to nitrogen ratio of the droppings from the 10:1 or 12:1 of droppings to about 20:1 or 25:1. This encourages microbial growth and minimises unpleasant odours, most of which are associated with emission of ammonia and other malodorous volatile N compounds.

This mix of droppings and woodchips is commonly referred to as ‘chicken litter’ and less commonly ‘poultry manure’. Depending on feed quality and feeding management and wastage, it usually contains 2-4% N, 0.3-0.6%P, 1.5-2% K and 0.3-0.5% S.

At today’s fertiliser prices, this equates on average to about $90/tonne worth of NPKS. But because of the transport and spreading costs, and lack of awareness by most farmers of its benefits, it usually sells for much less than this.

It also contains a lot of organic matter of course (typically 60-70% carbon) and a squillion bacteria. Most is ‘good’ bacteria, with a relatively tiny number of nasty disease bacteria like Salmonella.

There are two main options available with chicken manure. Most is applied immediately on pasture, maize for later grazing, or on other crops and kiwifruit and avocado orchards.

When applied to pasture, a minimum 21 days holding period is required before grazing. This provides plenty of time for any Salmonella bacteria to die. This practice optimises the amount of nutrient applied, and the addition of ‘good’ bacteria to the soil, and of course minimises costs.

However, up to 50% of the N can be lost as ammonia during and after spreading. The chemistry behind this is very similar to what occurs with urea fertiliser, as about half of the N is present as uric acid and urea, which quickly get converted to ammonium ions.

Because of the alkaline nature of the litter (its pH is normally about 8), the ammonium can be quickly converted to ammonia gas. So something needs to be done to stop this. Burying the litter is effective, but impractical.

The alternative could be to fully compost the litter. If kept in the right moisture content (30-50% by weight), the litter quickly self-composts to a temperature of 60-70 degrees C before dropping off after a few days. If the litter pile is turned every few days for the first fortnight to keep it aerated, it has the opportunity to be composted over a two-week period.

Only 1-2 days above 60 degrees C is needed to kill disease bacteria. The longer the composting goes on, the more the litter becomes a dark-coloured, sweet smelling compost, which greatly improves the soil’s water holding capacity, aeration and drainage. However, it is likely to have lost most of its N and bacteria, and about one third of its weight in the process, due to gaseous losses of ammonia, nitrous oxide and carbon dioxide gases.

Therefore, it depends what you mainly want from the litter. If it is for maximum nutrient content and healthy bacteria, then don’t compost. But if it is to improve soil structure and water holding capacity, then do compost it.

In my experience, dairy farmers who use chicken litter straight out of the shed swear by the tremendous pasture production it gives. They accept that, at application rates that will provide optimum applications of N and K without large losses to the environment, it needs to be applied with a sustained release form of P and S.

Genuine RPR, mixed with fine elemental S, is by far the best option.