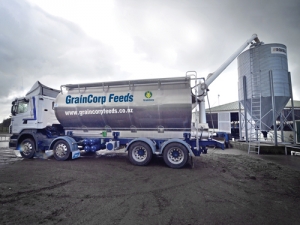 GrainCorp Feeds, formerly BLM Feeds, will officially unveil its new-look at this year’s National Fieldays at Mystery Creek in Hamilton.

The liquid feed and dry feed import and distribution company is one of four businesses that will fall under the GrainCorp umbrella of companies, including GrainCorp Foods, GrainCorp Liquid Terminals and GrainCorp Commodities.

“By tapping into GrainCorp’s global networks, we can now offer a wider range of unique products that will increase production and profitability on the farm,” he says.

In addition to the name change, GrainCorp’s head office has relocated from New Plymouth to Hamilton and its Waikato store has increased in size to cater for future growth and ongoing improvements in quality control.

“We know that the next 12-18 months will be challenging for New Zealand dairy farmers, so it’s important that we help them get the best return on their feed investment,” says Calcinai.