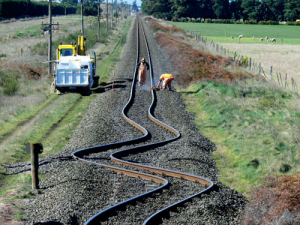 Roads and rail were out following the Kaikoura earthquake last year, creating logistical nightmares for both North Canterbury and Marlborough wineries.

The project is being led by three specialists; Joanna Fountain, Senior Lecturer in Tourism Management at Lincoln University, Nick Cradock-Henry, Senior Scientist at Manaaki Whenua Landcare Research and Jason Ingham and his team of structural engineers from University of Auckland.

Fountain says the multi-pronged approach to the research project is one of its greatest strengths.

“We are all from quite different backgrounds but can see the value of each other’s perspectives and research strengths.”

While the contract from MPI has only just been signed off, providing $313,000 over two and a half years, the team has already been working towards establishing a clear set of stakeholder-endorsed objectives. Cradock-Henry says a visit to Marlborough back in June highlighted that logistics in all forms was one of the major issues for the industry as a whole.

“The fact that the 2016 vintage was already in the tanks, and some of those tanks were damaged and some wine was lost, was one of the immediate impacts. But then the challenge for producers who still had wine in tanks and needed to bottle it, was how did they get it out of the region? There may have been another significant aftershock, and there were markets waiting for that 2016 vintage. So there were considerable issues around getting the wine to be bottled somewhere else.”

That logistical challenge impacted operators in different ways, depending on the winery involved, Cradock-Henry says. Some corporates were able to send the wine to other regions or offshore to be bottled, but the logistical nightmare was where to send it from, given Port of Wellington was out of commission, and how to get it there – as there was significant damage to the roading network. Then there were a number of smaller operators who didn’t have the relationships or networks of the larger companies, to have somewhere outside of Marlborough to do the bottling.

Another major issue that was raised by industry members, related to health and safety and staffing. Given the timing of the quake, just after midnight, and the month, there were no staff working in wineries at the time. But imagine if it had hit during working hours, or worse still during vintage when the wineries are staffed 24 hours a day? Fountain says many people interviewed admitted to dealing with their staff differently than they had back in 2013 during the Seddon earthquakes.

“It was really clear that a lot of lessons were learned from the Seddon event. There had already been a lot of adjustment about how they were dealing with things, particularly staff welfare.”

In this way, staff members were told to stay home and care for family and children, before dealing with catwalks and tanks.

As the project commences, Cradock-Henry says one of the first tasks to be undertaken will be the documentation of the structural impacts which will come under the umbrella of the University of Auckland’s engineering team.

“They need to look at tank design, how different tank designs performed under the different ground motion in the region and the influence of different soil types on that. What failed and why? How can we use some of the advances in tank design and bolting systems to reduce future losses?”

Another critical area of research for the industry, is reassuring markets in the event of a disaster, and ensuring a clear, consistent message is communicated the length of the value chain. Key overseas markets need to be confident that New Zealand wine will continue to be on the shelf at point of sale. Losing hard won market share can have long-term implications for the industry. Following the earthquake, organic and loosely coordinated assurances were communicated, rather than command and control. Despite the shaking “your favourite New Zealand Sauvignon Blanc will still be on the shelf. Marlborough may be bent but it isn’t broken,” says Cradock Henry

“If there is another event, one of the things we have been told is that market reassurance is critical. So how do we set up protocols and have some guidance so that message is in place?”

For North Canterbury wineries, perhaps the biggest immediate impact was in terms of wine tourism, and the flow of visitors passed the cellar doors. Fountain says the industry quickly became aware of what happens when all the cars turn left at the Hanmer turnoff and there is no through traffic to Kaikoura and Blenheim. That will be one area she will be garnering more information on.

“We are interested in the wine industry, but also in the whole value chain from the grape growers, to the grape pickers to the tourism operators and everything in between, because it is a systems approach; all the different parts of the system have to be sustainable.”

In essence, the research team are looking to identify what the impact was for all levels of the supply chain, what worked, and what didn’t. Only then can they come up with potential solutions that could be implemented to provide resilience if another high impact event happens in the future.

“This will provide us with a prototype or test-bed for looking at what the immediate impacts are of these sorts of events,” admits Cradock-Henry. “They are inevitably going to happen again. It might not be in Marlborough or North Canterbury, but it could be Hawke’s Bay or Gisborne. How can the industry start to incorporate better assessments of these risks into all aspects of their operational and strategic planning? Everything from logistics through to health and safety and staff well-being.”

Both Fountain and Cradock-Henry need to hear from all spheres of the New Zealand wine industry, on a wide range of issues. Public workshops and a national survey of industry members will be conducted over the next 12 months and both want to encourage everyone to take part. “Our objective is to produce research that is accessible and practical and that does make a difference to the industry in the long term,” Cradock-Henry says. “This is NZW’s project, the industry’s project, so input is vital.”

Your old mate wonders if the over-reaching do-gooder who set up a North Canterbury cow sanctuary “to save retired dairy cows and bobby calves from slaughter” will face any charges for animal cruelty.