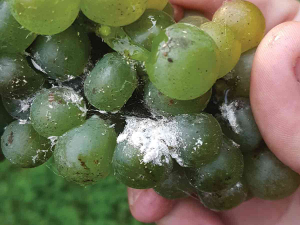 The photos that show how bad mealybug was in Marlborough this year. Photo: Matt Fox.

Bell, who spoke at the recent NZW Grape Days on controlling mealybugs, said photos shown to the Marlborough audience highlighted how serious the problem has become in the region. How growers react to that and in what way, will play a vital role in the future of the pest.

“Mealybugs are everywhere. No matter what we do, we have to learn to live with them. We can never eradicate them, but we want to minimize the influence in our grape vines.”

Unfortunately, Bell pointed out, in Marlborough’s case, that minimising has relied on something he’s referring to as ‘hard’ chemicals like prothiofos, chlorpyrifos, and others, which he says is not the way forward.

“Since 2016, around one-third (or 1500) of all Marlborough blocks were treated with synthetic pyrethroid for the control of adult grass grub flying in spring.”

That reliance is creating a cumulative influence he says, which is likely to come back and bite us.

“Ultimately it is going to lead us down a very difficult track. That hard chemistry is going to contribute to the loss of many beneficial insects like parasitoids. When that occurs, you end up with reduced influence of biological control.”

That in itself will lead to what Bell says they call “induced outbreaks”.

“You are never going to kill all of the mealybugs, all you will do is take the cream off that population. But there will always be a residual mealybug population and ultimately you create a downward spiral for the next year as your beneficial insects struggle to establish in affected vineyards. Your baseline population of mealybugs is just higher the following years, leading to what becomes a cumulative downward spiral.”

The option he suggested is to move away from hard chemicals and look at the softer options. With at least two active ingredients now available to growers, Bell says there are multiple products with differing modes of action.

“If you are using those products properly, and with properly calibrated machinery, you have the opportunity to ensure that resistance to those softer active ingredients doesn’t occur, meaning that chemistry can continue to work effectively against mealybug.”

He also suggested that instead of applying one or two sprays each season, growers should consider applying three for a few years, particularly to those blocks and/or vineyards badly affected by mealybugs.

“You are probably struggling to get on two as it is, especially at those pinch points in the season. But I think given the extent of the feedback received from the sector, we need to look at new ways of managing this problem and this option might be one of them.”

Admitting he was suggesting increased chemical use, which is counter to industry’s wish to reduce reliance on synthetic inputs, Bell said this idea is proposed as a short-term solution for a long-term gain.

“You don’t need to always look at a three-spray spring programme. Maybe when you have got on top of the mealybug problem and the population is reduced in two or three years, you can go back to two applications at or around flowering.”

In summary, Bell said if the audience members took nothing more out of his presentation, he wanted them to consider that hard chemistry is a short-term solution, not the long-term way forward. Instead adopt a ‘soft’ insecticide programme that maximises the value of the vineyard ecosystem, including the role and influence of beneficial insects.”

Making the most of chemical control

Pre-harvest monitoring. This allows you to find out the extent of the mealybug problem. There should be no more than 10 mealybugs per 100 leaves. Monitor and collect data, so you can determine if last season’s chemical use was effective or not.

Timing and Interval. Trial work has shown that applications closest to flowering have given the best results, rather than when the vines have very little leaf coverage. “You have a larger surface to get chemical onto, to come in contact with mealybug and you have more crawlers present.” Blakeman said if you only make one application of a chemical it should be immediately pre-flowering. “If you are going for two applications, one at pre-flowering and the other application should be 10 – 14 days prior to that.” A spirotetramat up to 10 days post flowering will further extend the period of insecticide cover. As with all chemical use, growers are advised to consult the NZW spray schedule and their wine companies. All mealybug insecticides can be included with your usual powdery mildew applications.

Coverage. It is essential if you are wanting to get on top of mealybugs. “Buprofezin is a contact insecticide so it has to come in contact with the mealybug at the time of application or very shortly afterwards. If you don’t make contact and you have mealybugs there, you will not kill them.”

Dose. “Our suggestion is to concentrate spray at about two times concentrate at half the point of run-off. This is probably higher than what you are spraying anyway. But you need to maximise that coverage and one of the ways to do that is by increasing our application volume.”