From New Zealand to Canada 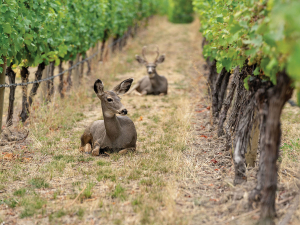 They may be beautiful, but deer create havoc in the vineyard.

We in New Zealand can thank our lucky stars that the pests we have to deal with in our vineyards are limited to birds, rabbits and grass grubs. Spare a thought for our counterparts in Canada.

They have to deal with a myriad of other vine loving creatures, such as bears, deer, elk, cougars, eagles, Californian Bighorn sheep and rattlesnakes.

That was the message New Zealander Kurt Simcic gave at the recent conference, after taking up the position of Senior Viticulturist for Sebastian Farms, responsible for all the fruit growing at the northern end of the Okanagan region.

Besides the animals, Simcic is learning to deal with conditions that are as far away from New Zealand’s maritime climate as you could imagine.

Winter temperatures that drop to minus 18 degrees, summer sunlight of 16 hours a day, intensely warm, desert like conditions that begin as soon as spring arrives and bud burst followed by flowering, with both often occurring in the same month.

Sebastian Farms started their organic conversion, the moment Simcic stepped off the plane back in May 2017. Since then he has had a lot of learning to undertake, when it comes to growing grapes in such a foreign environment, as well as converting conventional vineyards to organic under a different system to New Zealand.

Let’s start at the end of the year – the month of December, which is the winter harvest period. Ice Wines are a integral part of the Canadian wine scene. For Simcic it was a rude awakening, given the fruit cannot be picked until temperatures reach minus 8 deg and trending downwards.

“Ideally though, we don’t start picking until we are around minus 10. We want to make sure the fruit is frozen enough to get the right sugar level. But if the fruit gets too cold or frozen too solidly, it gets extremely hard for the winemakers to deal with in the press.”

That window of opportunity occurred in 2018 on December 23. If you think its hard to get pickers in New Zealand, imagine luring them into the vineyards when it is minus 10, and there are only two days to go until Christmas.  He says not all the fruit could be brought in prior to Christmas, so it was back into the vines on Boxing Day.

“We had 20 tonnes of semi frozen fruit to harvest, but that 20 tonne of fruit equates to approximately $1m dollars worth of wine to the company.”

Once the fruit is in, the job of pruning can begin, although the crews cannot wrap and tie down in the winter months, due to the brittleness of the canes.

By the time the months move on to April, the weather is starting to pick up and the wrapping and tying down of canes can be undertaken in earnest.

“All of the winter chores need to be completed by May because this is when bud burst begins.”

With a team of Mexicans, many who have made the journey north for 10 years, the hard work begins.

“Spring always comes with a bang,” Simcic said. “All the snow melts, which means there is loads of moisture in the ground. Couple that with dramatically rising temperatures, up to 30 degrees at times, it leads to bud burst followed by very rapid shoot growth. There is a real sense of urgency in the blocks. We shoot thin all of our vines and we only have about four weeks to do it.”
The very small spring window also impacts on cover crops becoming established.

“Nothing will grow in winter and it gets so dry so early in spring that if the seed hasn’t properly struck, it will likely fail for that year.”

Spring and summer provide very reliable growing conditions, so Simcic says he has to find ways of upsetting flowering to ensure bunch sizes don’t go through the roof.

“Because I am not keen on 200 gm bunches of Pinot Noir. Some of our sites are pretty low in key nutrients and I am trying to override instinct and embrace that a bit in an effort to disrupt the flowering process.”

He also removes leaves and all laterals, which he said has helped. As has starving the vines of a little water and trying to place them under a bit of stress, if conditions allow.

Onto summer, when conditions begin to resemble a desert, it is all about canopies.

“While we do want light and airflow, we also need to protect our fruit from the light intensity and the extended hours of sunshine. The sun is up for 16 hours a day at its peak and we tend to see a bit of sunburn damage in our Pinot every year. We cut it out at veraison.”

The temperatures and the extended sunshine hours mean the window for spraying sulphur is  small, especially given the hottest part of the day tends to be from 4pm onwards.

Combine the hot and dry conditions together and the environment is perfect for wildfires, 2000 of them in BC, Canada, last summer alone. The haze created by the fires creates perfect conditions for powdery mildew.

“I have noticed if growers have a relaxed spray schedule they will generally be stung with this problem.”

Harvest tends to begin in September and continue through into October. Weather conditions are generally dry which he said allows them to hang the fruit out for longer and wait for the flavours to develop to where they want them.

So while there are massive differences between Okanagan and New Zealand in growing conditions, Simcic said it is the wildlife present in the vineyard that stuns him the most.

Despite deer fences around the properties and stock gates, some interesting visitors always manage to make their way in. Bears apparently love the ripening fruit – to say nothing of the beehives that Simcic planted among the vines. “I did not consider the bear factor when I first got the hives. They thrived until the bears discovered them the following spring, then they had themselves a little picnic and caused a lot of damage.”

Bears apparently love to dig under the protective fences, and he says they are partial to
the ripe fruit around harvest time.

“They are a little more tricky to scare away than the starling flocks here in New Zealand.”

Then there are the moose, cougars, bobcats, elk, bald headed eagles and many other raptors. Which means his goal of having chickens roaming among the vines, removing pesky insects, is not an option. “Because your properties would quickly become a fast food joint.”

But deer are the biggest issue. They can cause thousands of dollars worth of damage to the fruit and the vines. To try and prevent the damage, bird netting was used to protect the fruit – from the deer, not the birds. The eagles and raptors do a good job of keeping flocks of other birds at bay.

In terms of other organic practices, Simcic says the transition has been going well and the first certified fruit was harvested last year.

“It’s a pretty dry climate, with approximately 350mm of rain per annum. The warm dry conditions help, with our under vine management and disease pressure being low. Powdery mildew is our biggest concern, but with a good protective spray programme, the organic blocks are looking the best in the valley.”

In terms of percentages, four percent of the Okanagan is organic, but when Sebastian Farms finishes its organic conversion, that figure will rise to 17 percent.

“My hope is we will inspire others to follow that path.”