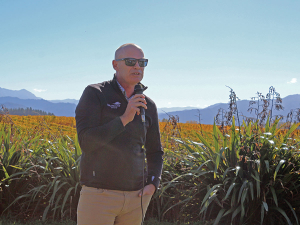 At the biennial Cawthron Marlborough Environment Awards, Pernod Ricard Winemakers took out the Wine Industry’s top award. Tessa Nicholson looks at why the judges were so impressed with the company’s environmental ethos.

It was a case of biodiversity at its best, when the Cawthron Marlborough Environment Awards held their field day at Pernod Ricard’s Brancott Estate. Guests sat in front of one of the many wetland plantings instigated by the company, while birds flitted among the lacebarks, flax and kowhai. Bees buzzed happily around the guests and the brilliant orange and red hues of the vines behind, melded into the backdrop of the Richmond Ranges.

Wetland plantings are one of the more obvious signs of Pernod Ricard Winemakers’ commitment to the environment and sustainability in Marlborough – but it is far from the only one.

One of the three judges at this year’s awards, Matt Oliver pointed out that the company was actively challenging what might be considered business as usual, to come up with solutions for environmental problems.

“They have come up with a corporate social responsibility ethos that goes from the top of the management in France, all the way down to the vine roots here in this vineyard.”

With over 2000 hectares of vines in the South Island alone, Pernod Ricard Winemakers have spent years getting to where they are now, firstly with a 2020 roadmap that challenged everything the company undertook in terms of sustainability. A 2030 roadmap has just been announced that will see those challenges extended even further.

Tony Robb, South Island Operations Manager said they have been “challenged by our owners in France and by our teams right here in the vineyards or the winery.”

For example, he said after a suggestion from a vineyard staff member, bird bangers are no longer used in any Pernod Ricard NZ vineyard, given they use LPG, a non-renewable resource. They have been replaced instead with netting where needed.

A wine decanter centrifuge has been purchased to deal with filtering lees in the winery. In the past more than 100 tonnes of waste ended up going to landfill.

Robb says the decanter meant all the material being processed as lees was “recovered to a higher quality level”. It was then mixed with the grape marc from vintage 2019.

“We returned this year, just over 4000 tonnes of marc back to our own vineyards,” Robb said.

Pernod’s Nic Dann said for a number of years they have been measuring all related products that contribute to greenhouse gases. That led directly to the company reducing the bottle glass content. “So we now have light weight glass in all our bottles.” There has been a 40 percent reduction in greenhouse gas emissions in the past nine years.

Reducing the use of diesel has seen the company look to multi row sprayers and “where possible we are going to invest in a fleet of recyclable spray units.”

Also helping reduce the diesel usage, sheep are brought into vineyards over the winter months to cut down on mowing.

Other data that has helped form sustainable moves, is monitoring what was being placed in skips at both the winery and vineyard level.

“We found that 60 percent of the winery skip was full of plastic packaging from winery additives and processing aides. That was going to landfill, yet it was recyclable.”

It was even more in the vineyard skips – 80 percent of the rubbish was plastic packaging. As a result, Pernod Ricard Winemakers are now challenging suppliers to either reduce the use of plastic or come up with ways of recycling. Since 2015 the winery has achieved a waste reduction of almost 47 percent, with the goal being Zero Waste to landfill by 2020

Broken wooden posts are a nightmare for all grape growers. In the past, those posts have ended up as landfill. Pernod Richard Winemakers now use only steel for new developments and wooden post replacements.

The company has also invested money and time into developing 14 hectares of wetland plantings and are looking to continue increasing that.

The lessons taught by Pernod Ricard here in New Zealand, could have a major impact on the environment, if all wineries were to follow some of their examples. Dann says there are three lessons they have learned in their sustainability journey.

It’s important to involve your people. “Everybody has a good idea and acknowledging where those ideas come from and taking steps to put into action, helps breed success.”

And finally, auditing provides you with data to measure against. “Once you have a plan and you have measurable data, you can track success.”