The insidiousness of trunk disease 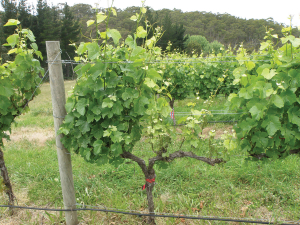 Ignore trunk disease at your peril, is the message that came from Mark Sosnowski at the recent NZW Grape Days.

With the stats to back his assertion up, he highlighted how quickly a few diseased vines can turn into economic disaster if nothing is done.

Sosnowski, from South Australian Research and Development Institute (SARDI) is one of three who have been monitoring the prevalence of Eutypa and Botryosphaeria in vineyard blocks in both Hawke’s Bay and Marlborough over the past five years.

In 2013 700 individual blocks were surveyed, throughout the two regions. In total the blocks had 21 varieties, with Sauvignon Blanc, Merlot and Pinot Noir the dominant ones.

In each block 200 vines were randomly selected, and assessed for foliar symptoms and/or signs of dieback. Of the 140,000 vines surveyed, 8 percent showed signs of either Eutypa or Botryosphaeria.

In 2018 the survey was repeated, although this time there were just over 600 blocks involved. Sosnowski says they also recorded any missing and dead vines last year, to add to the information.

Frighteningly in just five years, the incidence of dieback had more than doubled, from 8 to 20 percent.

In 2013 eight blocks had more than 60 percent incidence of dieback, that increased to 31 blocks in 2018, despite there being fewer blocks within the survey. The majority of those 31 blocks were in Hawke’s Bay.

“The dieback symptoms start to appear pretty early in the life of the vines. In some cases we saw four or five-year-old vines with missing spurs already.” Given it can take three years from infection until symptoms, that means the vines had to be infected within a year or so of planting.

The older the vines, the more prevalent the disease. By 10 years of age, Sosnowski says “things were ramping up. Then the period between 10 and 20 years, we are seeing infections going from 20 to 80 percent in some vineyards.”

One of the interesting results from the survey was the low incidence of foliar symptoms associated with Eutypa (see Eutypa versus Botryosphaeria at bottom of article). That may indicate that Botryosphaeria is the more dominant disease here in New Zealand and more research is currently being conducted to determine if that is the case.

“It is really important to stress that if you are relying on foliar symptoms to monitor for disease, you are going to be missing a lot of your infected vines.”

The dieback incidence varied across the age range of vines, although the older the vine became, the higher the incidence. There was also a noted difference in incidence between spur pruned vines and cane pruned, with the former having a 34 percent dieback incidence compared with 17 percent for cane pruned.

“The main reason for the difference is the location of wounds, which on cane-pruned vines is close to the trunk, compared with cordon pruned, where there are a lot of wounds all along one arm. When they get infected, visually we see that infection a lot earlier than in a cane pruned vine. You are still getting the infection at the same time, but it is quietly moving down into the trunk and slowly attacking the trunk in a way we can’t see.”

“The take home message is that both methods of pruning are susceptible to infection and both will lead, at different times to the death of the vine.”

But as Sosnowski said, it is not all doom and gloom, because there are management practices that can help stymie the disease. Remedial surgery is one of those (more on that in a later issue).

And wound protection, which is the best protection going forward.

“We have a threshold of vines up to 20 years of age, with just 20 percent disease incidence. None of these blocks have gone over 20 percent infection. Compare that with what we see with the rest of the sample, blocks with 20-year-old vines with 80 percent plus infection.

This is a very positive direction.”

Foliar symptoms that include stunted yellowing shoots, cup margins and irregular fruit growth are related to the Eutypa Lata fungus. The toxins are produced by the fungus within the vine’s trunk and then carried up the foliage to cause the visual symptoms on green tissue.

However, the fungus itself is not actually found in the green tissue.

In terms of Botryosphaeria dieback, you don’t have foliar symptoms, although the fungus can infect green shoots. The major signs of this disease are dieback on spurs or whole arms on cane pruned vines and cankers that start coming down the trunk from pruning wounds.

Both diseases kill the vine eventually.

The cycle begins with the Eutypa or Botryosphaeria fungus producing spores which are either rain splashed or wind-blown to infect freshly cut pruning wounds.

“The spores find it very easy to make their way into the vascular tissue (responsible for carrying water and nutrients through the vine) and once they germinate they start to grow, killing the tissue as they go.”

This dead tissue appears as staining within the trunk of a vine, very noticeable when the trunk is sliced open.