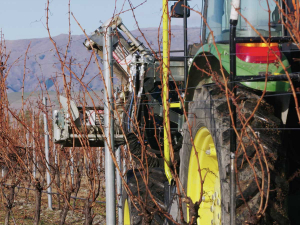 Growers and companies all over the country were facing shortages and every year there was the underlying fear that pruning would not be completed in time for bud burst.

The Klima quickly caught the attention of grape growers in both New Zealand and Australia, but breaking into the US has until recently been a difficult one, says Klima founder Marcus Wickham.

“There has been no mechanisation in American vineyards ever, everything has been done with Mexican labour. They are so far behind us from a labour point of view, it’s unbelievable. They have never constructed their vineyards with any regard to costs or availability of labour. They are still hand-picking thousands and thousands of acres for table wine that is not really that flash. But it’s not been a problem, because labour was readily available and it was cheap.”

But that is changing Wickham says as the current Mexican workforce grows older.

“The original immigrants that came into the US were fleeing abject poverty. They couldn’t speak English, they were illiterate and illegal.

“So the only thing they had to trade was their physical labour. And there were lots and lots of them, they have been an amazing workforce.”
However that original group of immigrants’ children have been raised as Americans, they are educated and they do not want to replicate their parent’s jobs in horticulture for $7 an hour, Wickham says.

“If you talk to the large grape growers, they say they are facing a labour shortage for the first time ever. They are having to look at mechanisation as an alternative for manual labour.”

The Klima is the perfect solution, although it has taken two New Zealanders taking up key viticulture roles for Constellation in the US, to really drive the point home.

Having worked with the Klima in Marlborough, Ollie Davidson and James Nightingale knew what the benefits were.

They imported a couple of machines and their success has led to other companies and contractors importing them as well. They are also raising eyebrows with their approach to vineyard establishment Wickham says.

“James and Ollie marked out and planted a large new vineyard on one of their sites. They did it the way we would do it here, by marking it out with GPS, planting the vines with a device towed behind a tractor. Then they rolled out the irrigation and put the posts in. We have been doing that for 20 or 30 years. So it was perfectly normal for them to do it that way. But in America they do it all back to front. They put all the posts in by hand – every single post is knocked in by a human being.

“Then they run all the wires, run all the drip lines and then they come back later on and hand plant all the vines.”
Apparently the way Davidson and Nightingale undertook the development, saved Constellation US$1 million in construction costs. Easy to see why the company is taking mechanisation in all forms seriously.

Wickham says education is key to growing the market. Having two New Zealanders “spreading the gospel,” and someone on the ground talking with industry members is vital to future export success.