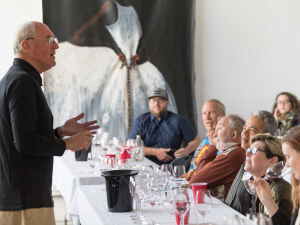 David Strada clearly recalls the moment he was asked which part of Australia New Zealand was in, “and my chin hit the table”. It was 1998, the US market was worth a couple of hundred thousand cases of New Zealand wine a year, and the San Francisco-based New Yorker was running his first New Zealand wine seminar in Boston. “The most important lesson I learned was cover the basics initially,” he says. “It was definitely for me - and certainly the rest of the country - a learning curve.”

Twenty-two years on, as he leaves his role as US Marketing Manager for New Zealand Winegrowers (NZW), there are more than 9 million cases of New Zealand wine sold there each year, in an “unprecedented” growth trajectory, driven by Sauvignon and “unmatched by any other import country”, says David. “No one else has shown that kind of progress.”

New Zealand Winegrowers Chief Executive Philip Gregan says when David began working as a “promotional partner” with the New Zealand Wine Institute in 1998, New Zealand had less than 10,000 hectares of vineyard, produced more Chardonnay than Sauvignon Blanc, and sent $26 million of exports to the USA, “out of a grand total of $169m”. Two decades on, vineyard area has expanded to 40,000ha, New Zealand produces 12 times more Sauvignon
than Chardonnay, “and
our exports to the US have climbed 24-fold to over $600m”, says Philip, noting that David put New Zealand wine “front and centre” of everything he did.

It’s been an exciting, demanding and fulfilling role, says David, who admits he went out on a limb in deciding to work exclusively with New Zealand wine.

“That could have been seen as a limiting move, but I have had very good timing,” he says. “I’m not sure if any other time in my life has had such good timing. I have identified with New Zealand and the wines and the people.”

Just as important as his timing, “if not more so”, was the fact that New Zealand was growing high quality wines of distinctive styles not found anywhere else, he says. “Consumers recognised and responded to this.”

He had loved the wines from first sip, including Sauvignon Blanc that was an “exciting” shift from what he was used to. “As soon as you put your nose over the glass you had an idea of what was coming. When you had a taste, you had to sit up straight and it brought a smile to your face.”

At a time when more and more wine seemed homogenous, “New Zealand stood out”, he says.

David’s role was to explain that to Americans across the country, from the basics of where, to the more complex conversations of how, including cool climate viticulture and new world ethos. It was slow going to start with, and for the first decade he wondered whether he’d chosen a wise path, as the US clamoured for Australian wines, as well as those made on their own shores.

But that all changed a decade ago, as New Zealand gained a foothold and sales soared. These days, Americans may not all know a lot of detail about New Zealand, but there’s a “warm fuzzy feeling” about the country, along with awareness of rugby, the America’s Cup and “the current political leadership” - somewhat “burnished” through Covid-19, says David. There’s also a continued appetite for New Zealand wine, including Sauvignon Blanc in a style “that appeals to so many people”, he says. “I can say with confidence that it is not a fad.”

But there will be a cap to the volume growth, David adds, noting that total wine consumption has grown in the US over the past 25 years, largely because of an increase in the size of the legal drinking age population. That’s hit a plateau and is not expected to change over the next 10 to 20 years, he says.

“New Zealand sales continue to grow, which indicates that sales are coming at the expense of other categories... at some point they will hit a peak. It is critical at that time that the peak becomes a plateau rather than a cliff. And value becomes as important as volume.”

As he moves on from his role with NZW, David is planning to work with individual companies to help them create greater success in the US, which may be the world’s largest wine market “but is also the most competitive”. Ratings alone no longer sell a wine, he says – “every single wine has to have an effort to be sold”.

In the past few years he had realised that, with the New Zealand category well established, the next step is for Americans to know more about the country’s iconic producers.

“I think we need to get to know the people and the places and celebrate that. I am hoping to work with some individual wineries, or groups of wineries, and help them with their presence on the ground now.”

That was a valuable proposition before Covid-19 changed the landscape for New Zealand companies in the US, and now it’s even more vital, David says.

New Zealand wines could stand to benefit from Covid’s impact on the US hospitality trade, says David Strada.

The former US Marketing Manager for New Zealand Winegrowers says as the restaurant trade gets back in gear, they will want to pare back on wine offerings and limit expenses.

“Oddly, I think that will work in the favour of New Zealand,” says David, noting that New Zealand wine is typically “undervalued” in the market. They’re also a good fit on-premise and could very well “fill the gap” as restaurants shed high priced options.

Ultimately, he wants to see the wines priced higher in the US, by increasing the respect for New Zealand’s best wines, “as opposed to its most common”.