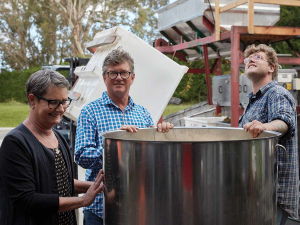 “We have an expression that unless you have dirt under your fingernails, you’ll never know how to grow a vine,” says James Millton from his eponymous Gisborne vineyard.

And Sam and Monique Millton certainly got more than dirty hands when working in the vines and winery as children, taking on the ethos of organic and biodynamic winegrowing, and their parents’ passion for artisanal wine.

These days Monique is growing her own natural wine in Australia’s Adelaide Hills, while Sam has worked the past seven vintages at Millton Vineyards and runs his own wine bar and deli in Gisborne, where organic and biodynamic natural wines share space with vinyl playlists. Both children bring new ideas to Millton, working within a common philosophy while evolving styles and practices.

James and Annie say the passing on of Millton Vineyards is happening organically, with the broad strokes determined by their children’s life decisions, while the finer details are being worked through with an accountant. James also credits a global network – the Renaissance des Appellations biodynamic wine group – for easing succession for its members. Sam has visited several family-owned operations, returning with new enthusiasm for the business, along with evolved ideas, such as gentle macerations, soft extraction, reduced additives and a stylistic change for Millton’s Riesling.

Generational change is one of the rhythms of the wine industry, which James sees as having 30 year shifts. Good succession preserves what has been established, but also recognises that there may be some “weird and wacky ideas” mooted, some of which will help the business model remain viable into the future, he says. “Your mind has to be like a parachute – if it’s not open you’ll fall.”

Christine and Dave Macdonald admit it was a romantic whim to name Bladen for their children Blair and Deni.

Sam and Mandy Weaver always hoped their sons Jack and Ben would join them at Churton.

There was never any pressure nor expectation the Sutherland children would join parents Ivan and Margaret in Dog Point Vineyards.