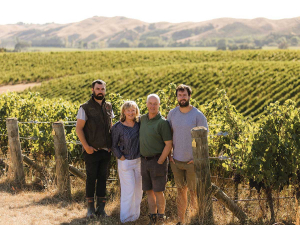 Sam and Mandy Weaver always hoped their sons Jack and Ben would join them at Churton.

“We put the opportunity in front of the boys and let them know - if they were interested and showed a commitment - then there were openings,” says Sam, from their hillside Waihopai Valley farm.

After finishing university, Ben did vintages at organic wineries in California, the Rhone Valley and Canterbury, while Jack developed his sales skills in Argentina and did vintages in Portugal, Switzerland and Australia. “It was an evolution really,” says Sam. “It was absolutely essential they travelled and built up experience, and it was just fortunate that the timing worked for them to come back home when the gaps opened up.”

Working and playing together presents challenges and the family guards against social events turning into business meetings, Sam says. “We are all aware of the stresses and strains – it’s not all plain sailing.” Parents need to realise the next generation doesn’t necessarily do it the same as the last, he adds. “The key for us has been giving them the confidence to go ahead and if they make a mistake then making sure we catch it before a disaster.”

Ben and Jack grew up on the family farm, where organic grapes are grown alongside cattle, under an ethos of farming delicately, with a focus on biodiversity and biodynamics. They saw the passion their parents had for the land and the satisfaction they derived from producing handcrafted quality wines. Their return to New Zealand around five years ago came at an opportune time. “I was aware I was beginning to get tired and grumpy.” says Sam. “It’s fantastic seeing the development that is going on from the younger generation – young people are looking for authenticity and that’s played quite well for us with the boys on board.”

The glamour of the wine industry has played its part in the succession, he adds, admitting they might not have readily returned to a pig farm. From Jack’s perspective, having a multifaceted industry was a drawcard, and he loves that he can be enjoying wine dinners in Wellington one day and on a tractor in the vineyard the next.

The brothers bring fresh enthusiasm, energy and ideas, says Jack. “Our business has certainly seen changes in the last few years, which is a direct result of the second generation including the introduction of our Natural State wines, which helped introduce Churton to a lot of new drinkers.”

Churton’s success resonates from a common passion, he adds. “Navigating a business where all key positions are from the same family provides difficulties, but they are heavily outweighed by the positives we all bring individually and, more important, collectively.”

“We have an expression that unless you have dirt under your fingernails, you’ll never know how to grow a vine,” says James Millton from his eponymous Gisborne vineyard.

Christine and Dave Macdonald admit it was a romantic whim to name Bladen for their children Blair and Deni.

There was never any pressure nor expectation the Sutherland children would join parents Ivan and Margaret in Dog Point Vineyards.