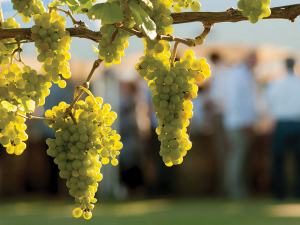 "We were in a bit of limbo wondering if or when our barrels were going to arrive in time for Chardonnay," says Pete from The Hunting Lodge in Waimauku. "It did take us by surprise and cut our summer a bit short."

The Hunting Lodge starts its vintage with contract winemaking of Matakana fruit, typically in the first week of March. So when Pete realised he'd have the first pick on 22 February, with some barrels still to arrive due to Covid-related shipping contraints, he had to reallocate his oak. "In the end, only a couple of cooperages didn't get here until well and truly after Chardonnay ferments," he says, relieved that the necessary dry goods did get in.

Pete says the Auckland vineyard had a "little bit of a tickle up" from early season frost, impacting on the Chardonnay at budburst in late August. "That's something we haven't seen for about 10 years," he says. Secondary growth came through, but yields were still down "a little bit".

The rest of the season was "great", with little bits of rain at the right times, and relatively good flowering on everything bar the Chardonnay, which had an uneven set. "The Sauvignon Blanc and young Albariño vines were actually quite even," he says. Waiheke had reasonable yields as well, and with their reds in particular, says Pete.

The early harvest may be down to the combination of a drough season in 2020 and a mild winter, meaning some vines were "a bit confused", and didn't achieve complete dormancy over winter, then sprung into a "really early budburst", he says. The year was also characterised by "really high sugars, but reasonably high acids as well," Pete adds. "The sugars were a lot more advanced than the grapes were in terms of phenological ripeness."

He has worked on the site for nine vintages - five of them as The Hunting Lodge - and this was the earliest start by a long shot, he says. While the Waimauku whites were in by mid-March, their full vintage - with fruits from Marlborough and Hawke's Bay - was drawn out, with completion on 16 April.

Pete says the resulting wines look great, including those from Auckland and surrounds, as well as Hawke's Bay and Marlborough, from where they bring in fruit. "We thought 2020 was an amazing vintage, but I think this is definitely on a par with that in terms of quality."