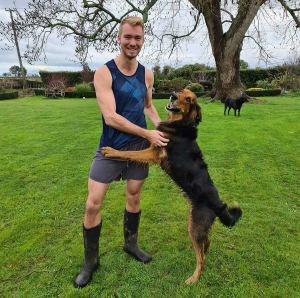 Jack Keeys is running 26km from Paeroa to Thames to prepare for the marathon on November 1.

Last year at the age of 24, Jack was diagnosed with melanoma — the same disease that took his father Kevin when Jack was just 12 years old.

Jack balances his work as an Agri-food Research and Insights analyst at KPMG with helping his mum back on her dairy farm after she recently lost her partner.

“I decided to run the Auckland Marathon in gumboots to raise awareness and funds for these two awesome organisations.’

“It’s really cool when these young guys get in and do something for our trusts, as it helps get the word out that we have Rural Support Trusts around the country here to help look after all our rural people.

“Sometimes it’s harder for younger guys to pick up the phone and ask for help, and we want them to know that we are just a phone call or email away.”

“What great Kiwi spirit to run a marathon in gumboots - it’s truly epic!

“And by sharing his story, Jack is helping raise awareness that melanoma is reasonably common in your mid-20s and 30s, so it’s vital to be vigilant when outside, cover up, wear sunscreen, and make sure you get regular skin checks, as it could save your life.”

You can donate to Keey's marathon here.

A Waikato and South Auckland agricultural industry group says vaccination and planning are the best defences against Covid-19 causing disruptions on farm.

Keep connecting. That's the message to farmers from the chair of the Rural Support Trust, Neil Bateup.