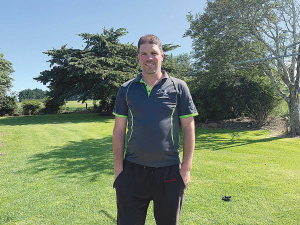 Now into its 15th year, the programme is an intensive year-long commitment built around a series of workshops, distance learning modules and coaching. It exists to help identify and develop governance acumen in future rural leaders. Being custom designed in conjunction with Massey Business School to be specific to the cooperative context, it is unique in New Zealand. Attended predominantly by Fonterra farmer shareholders and herd-owning sharemilkers it is also open to members of other New Zealand cooperatives such as LIC, Silver Fern Farms and Foodstuffs.

Growing up in Wellington city, farming wasn’t on Jono’s radar at all until he started helping his older stepbrother out with his farm job in the school holidays. But after leaving school at 16, he knew what he wanted to do – he signed up for the one-year Certificate in Agriculture at Telford in South Otago and hasn’t looked back.

Over the next 12 years he progressed through farm work, management, and lower order sharemilking roles in Otago and Southland, winning the 2007 Southland Dairy Trainee of the Year along the way. In 2012, he and his wife Kelly started 50 per cent sharemilking 500 cows, adding a business interest in a second 50/50 sharemilking arrangement of 700 cows in 2018.

In 2015 Jono and Kelly scooped the Southland-Otago Sharemilker/Equity Farmer of the Year award and five merit awards for leadership, health and safety, recording and production, farm environment and risk management.

By 2015, having got the hang of the hands-on side of dairy farming, Jono was ready to broaden his skill-set and horizons and make a contribution to his industry. His first role was on the board of the Telford Farm – the working farm attached to the campus where he studied. Jono now chairs that board, and credits his involvement with it for “opening his eyes” to the importance of what goes on in the boardroom.

In 2017 he joined the Southern Dairy Development Trust Board, and in 2018 became a board member of the Dairy Industry Awards executive committee.

“I think it’s important to have interests beyond your farm gate,” says Jono. “It might sound strange, but governance is like a hobby for me. I get stimulation, learning opportunities, and opportunities to meet new people, and I can make a contribution to enterprises that I believe in.” He has a particular passion for promoting rural education and careers and for tackling some of the many improvement opportunities he sees for the sector.

Jono says he brings a perspective to these boards borne from his relative youth and his less conventional entry into farming, as well as real enthusiasm for getting things done.

“Farming is changing and those of us with many years ahead of us need to approach our businesses differently from how the older generations operated,” he says.

Part of moving with the times is continual learning, and the Fonterra GDP was a logical next step for him. “So far, I’ve I learned by doing,” Jono says, “so I’m looking forward to consolidating my on-the-job learning with something more formal. I hope it’ll help me figure out my ‘why’ and where I want to go next, as well as continuing to contribute to a sustainable future for our industry.”

The Campbell Shearer Scholarship, which Jono has received, was named after respected industry personality Campbell Shearer who died suddenly at age 49 in 2018. Shearer’s industry contribution included his work as a proud Bay of Plenty dairy farmer, engineer, plant manager with Fonterra’s predecessors, and deputy chairman of the Fonterra Shareholders Council.

During his time on the council, Shearer chaired the Governance Development Programme. He believed strongly in the governance capabilities of the co-op’s farmer owners.