Line up for Checkpoint 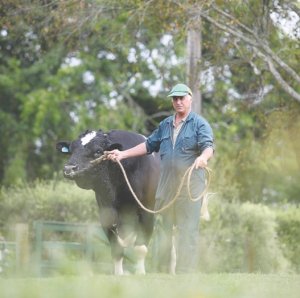 IT’S A day-on, day-off working week for New Zealand’s best ever artificial breeding bull Howies Checkpoint. Farmers are lining up to use the ‘once-in-a-lifetime’ bull in the upcoming dairy mating season, but LIC says it has to make sure he doesn’t get worn out.

LIC’s general manager genetics, Peter Gatley, says the KiwiCross bull will mate more than a quarter of a million cows this spring.

“That’s a big workload for any bull but it’s made possible by using our fresh semen technology which delivers 10 times the number of straws as conventional frozen,” Gatley says.

“We are doing our best to ensure that every farmer who signs up for the KiwiCross team gets a fair share of him.”

Through the spring mating period, Checkpoint will be collected every second morning on LIC’s Newstead bull farm, creating up to 5000 straws of fresh semen to be inseminated into cows all over the country the following morning.

A bull as good as Checkpoint only comes along once in a lifetime, but we have to balance the temptation to overuse him, says Gatley.

“One of the challenges we have is to provide a variety of different bloodlines needed for genetic diversity. It’s been 40 years since the country has had a sire [like Checkpoint].”

The bull has a breeding worth (BW) of 327 (83% reliability), 60 BW ahead of the second placed sire Fairmont Mint Edition, also from LIC.

The average BW of the KiwiCross Daughter Proven team is 241 – 20 higher than the Holstein Friesian and Jersey teams.

Gatley says Checkpoint is 9/16 Holstein Friesian and is strong across all traits.  He is a result of an LIC contract mating with a past top bull, Shalendy Amorous, and one of the best cows in New Zealand, the product of the GeneRate embryo programme.

When he was born, DNA analysis identified his elite status, but it was his daughters who proved just how good he really is when they came into milk in 2011.

“Sometimes an offspring will end up with an extraordinary selection of the best genes, surpassing both parents, and that is what’s happened here,” Gatley says.

A novel scientific approach which has identified a number of genetic variants impacting the health and wellbeing of New Zealand dairy cows has been published in the prestigious scientific journal, Nature Genetics.

Bull burps could hold the answer

Breeding low methane emitting cows is a step closer after promising results from a pilot trial.