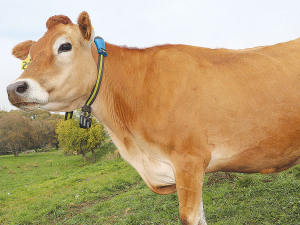 Silver Sponsor Allflex Livestock Intelligence is including an animal monitoring system in their prize package.

Allflex says it has been a long-time supporter of the Ahuwhenua Trophy for Excellene in Maori Agriculture, which focuses on dairy, sheep and beef, and horticulture in a three-year cycle.

The award's heritage goes back to 1933 when it was launched by Sir Apirana Ngata and then-Governor General, Lord Bledisloe.

General manager Jared Briggs says Allflex's move of sponsor support from the cash contribution made previously to the Animal Monitoring system aligned more closely to what the Ahuwhenua awards were all about.

"We are keen to show our support for excellence in a more meaningful way and felt the Animal Monitoring system will provide the winning farm with a great plaftorm to take their operation to an even higher level," Briggs says.

Briggs, and Allflex national sales manager Austin Heffernan, attended the announcement of the three finalists - all located in the North Island - for the 2021 Ahuwhenua Trophy at Parliament's Grand Hall in March.

The Tataiwhetu Trust runs 432 kiwi cross cows in an organic farming operation at a property in the Rūātoki Valley south of Whakatāne.

Briggs says the finalists are three widely contrasting operations but share a desire to showcase excellence while sustatinably developing their land and environment.

"Each of these would be a worthy recipient of the Ahuwhenua Trophy for Maori Dairy Farm of the Year."

The animal monitoring system is scalable to any operation, large or small. Briggs says the heat detection offers much greater accuracy while reducing labour inputs and eliminating the need for patches and tail paint. By tracing rumination, the system also gives early notice of a cow's response to nutrition changes, while also raising an early red flag for animal health issues such as mastitis or lameness, he explains.

"We are looking forward to working with the winner to help them implement their animal monitoring system and enjoy its benefits.